The Princess and the Prophet: The Secret History of Magic, Race, and Moorish Muslims in America (Hardcover) 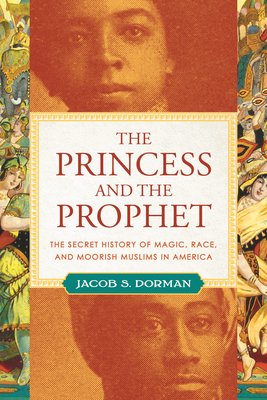 Delving into new archives and uncovering fascinating biographical narratives, secret rituals, and hidden identities, historian Jacob Dorman explains why thousands of Americans were enthralled by the Islamic Orient, and why some came to see Islam as a global antiracist movement uniquely suited to people of African descent in an era of European imperialism, Jim Crow segregation, and officially sanctioned racism.

The Princess and the Prophet tells the story of the Black Broadway performer who, among the world of Arabian acrobats and equestrians, Muslim fakirs, and Wild West shows, discovered in Islam a greater measure of freedom and dignity, and a rebuttal to the racism and parochialism of white America. Overturning the received wisdom that the prophet was born on the East Coast, Dorman has discovered that Noble Drew Ali was born Walter Brister in Kentucky. With the help of his wife, a former lion tamer and “Hindoo” magician herself, Brister renamed himself Prophet Noble Drew Ali and founded the predecessor of the Nation of Islam, the Moorish Science Temple of America, in the 1920s.

With an array of profitable businesses, the “Moors” built a nationwide following of thousands of dues-paying members, swung Chicago elections, and embedded themselves in Chicago’s dominant Republican political machine at the height of Prohibition racketeering, only to see their sect descend into infighting in 1929 that likely claimed the prophet’s life. This fascinating untold story reveals that cultures grow as much from imagination as inheritance, and that breaking down the artificial silos around various racial and religious cultures helps to understand not only America’s hidden past but also its polycultural present.

Jacob S. Dorman is a professor of History and Core Humanities at the University of Nevada, Reno. He is the author of the CHOICE Outstanding Academic Title Chosen People: The Rise of American Black Israelite Religions (Oxford University Press, 2013), which won numerous book prizes. Dorman has been awarded fellowships by the National Endowment for the Humanities, the American Council of Learned Societies, the Andrew W. Mellon Foundation, Columbia University, the University of Chicago, and many others.

“Dorman does an excellent job of presenting his information in a clear and entertaining manner, making the subject matter so interesting that you can’t helped but be pulled into the narrative.”
—Qantara

“Performer, prestidigitator, peddler, preacher, prophet, politician, prisoner, and precursor of Nation of Islam—these are the many faces of the enigmatic Noble Drew Ali. Jacob Dorman’s deft and riveting historical ‘thriller’ demolishes everything we thought we knew about the man, his equally mysterious wife, and the movement he led. A journey through continents and circus tents, barbershops and backrooms, millennia of religious traditions and an ersatz ‘Orient’ embodied in the flesh of Black pretenders, The Princess and the Prophet is itself a prodigious feat of detective work and archival magic. A spectacular book in so many ways.”
—Robin D. G. Kelley, author of Thelonious Monk: The Life and Times of an American Original

“The Princess and the Prophet is a must-read! Jacob S. Dorman weaves together fascinating and compelling tales of circuses and theatrical stage shows and love and religion to reveal the deeply layered and mysterious public and private life of the first Black Muslim prophet. With this major contribution to the fields of African American and religious studies and of US history, Dorman illuminates how America’s socioeconomic and political landscape of racial segregation, corruption and vice, Northern migration and immigration, and public and private amusements shaped African Americans’ varying interpretations of and attraction to Islam during the early twentieth century. The Princess and the Prophet is certain to transform our understanding of African American history, leaving readers with new ways of discussing Black life, culture, and religion.”
—LaShawn D. Harris, author of Sex Workers, Psychics, and Numbers Runners: Black Women in New York City’s Underground Economy

“A masterful blend of rigorous scholarship and compelling narrative, The Princess and the Prophet is an immense accomplishment. Dorman illuminates lost chapters of American history and transforms our understanding of an American prophet. The Princess and the Prophet will make a lasting contribution to our study of American religion.”
—Michael Muhammad Knight, author of The Five Percenters: Islam, Hip-hop and the Gods of New York