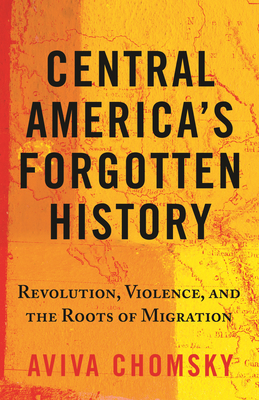 Restores the region’s fraught history of repression and resistance to popular consciousness and connects the United States’ interventions and influence to the influx of refugees seeking asylum today.

At the center of the current immigration debate are migrants from Central America fleeing poverty, corruption, and violence in search of refuge in the United States. In Central America’s Forgotten History, Aviva Chomsky answers the urgent question “How did we get here?” Centering the centuries-long intertwined histories of US expansion and Indigenous and Central American struggles against inequality and oppression, Chomsky highlights the pernicious cycle of colonial and neocolonial development policies that promote cultures of violence and forgetting without any accountability or restorative reparations.

Focusing on the valiant struggles for social and economic justice in Guatemala, Nicaragua, El Salvador, and Honduras, Chomsky restores these vivid and gripping events to popular consciousness. Tracing the roots of displacement and migration in Central America to the Spanish conquest and bringing us to the present day, she concludes that the more immediate roots of migration from El Salvador, Guatemala, and Honduras lie in the wars and in the US interventions of the 1980s and the peace accords of the 1990s that set the stage for neoliberalism in Central America.

Chomsky also examines how and why histories and memories are suppressed, and the impact of losing historical memory. Only by erasing history can we claim that Central American countries created their own poverty and violence, while the United States’ enjoyment and profit from their bananas, coffee, mining, clothing, and export of arms are simply unrelated curiosities.

Aviva Chomsky is a professor of history and the coordinator of Latin American Studies at Salem State University. The author of several books including Undocumented and “They Take Our Jobs!”, Chomsky has been active in the Latin American solidarity and immigrants’ rights movements for over 30 years. She lives in Salem, Massachusetts.

“A fiery, revelatory survey of Central America under U.S. domination...Chomsky challenges readers to acknowledge that Donald Trump’s policies were 'only the most recent iteration of over a century of U.S. domination and exploitation of Central Americans.' A compelling historical synthesis, told with style and moral clarity.”
—Library Journal, starred review

“A convincing case that much of Central America’s violent unrest can be laid at the feet of US leaders.”
—Kirkus Reviews

“A searing examination of how colonial oppression, Indigenous resistance, and political and economic turmoil have fueled migration from Central America to the U.S.”
—Publishers Weekly

“This is a text that is sorely needed, and there is nothing like it available, a brilliant, deeply researched, and concise ‘forgotten’ history, not only of Central America but also of US military occupations and interventions that have created the refugees at the US-Mexico border.”
—Roxanne Dunbar-Ortiz, author of An Indigenous Peoples’ History of the United States

“Aviva Chomsky’ Central America’s Forgotten History is essential reading, an antidote to mainstream coverage that ignores the larger context of the crisis. Its roots, as Chomsky concisely and convincingly reveals, are deep, and many of them snake back to Washington, to a century of catastrophic security and economic policies.”
—Greg Grandin, author of The End of the Myth: From the Frontier to the Border Wall in the Mind of America

“In this breathtaking book, Aviva Chomsky chronicles Indigenous organizing and international solidarity movements that should guide contemporary efforts to reform US foreign policies vis-à-vis the Global South.”
—Paul Ortiz, author of An African American and Latinx History of the United States

“For decades, policy makers and the public have grappled with the problem of undocumented immigrants and have at the same time ignored the reasons why so many Central Americans, in particular, are fleeing in caravans of thousands to the US. . . . Until we understand the US’ role and continued complicity in perpetuating these conditions, a true solution to the immigration ‘problem’ will remain out of reach. Professor Chomsky’s book illuminates this willfully forgotten history.”
—Patricia Montes, executive director, Centro Presente

“With rich detail and accessible analysis, Aviva Chomsky demonstrates how the colonial crucible itself is ultimately a fight over how history is remembered—and why such history is so important for advancing popular struggle.”
—Steve Striffler, author of Solidarity: Latin America and the US Left in the Era of Human Rights

“I have been waiting for Central America’s Forgotten History for the past decade. This thorough and thought-provoking book revives the history that has long been severed from the Central American experience in US discourse, especially around immigration.”
—Todd Miller, author of Storming the Wall: Climate Change, Migration, and Homeland Security

“[Central America’s Forgotten History] gives insight to a history that we never really look at in school. It was very informative and I would recommend!”
—Kylee-Ryan Hodnett, student, Salem State University

“Aviva Chomsky delivers a detailed account of the untold history of Central America. This book is a wonderful read for those searching to further their knowledge on the United States’ hand in shaping the policies and governments in Central America and the effects it had on the people.”
—Kerry Williams, student, Salem State University

“Professor Chomsky, in the great tradition of speaking truth to power, provides a detailed account of the often-forgotten neighbors to our south. It is necessary to know and understand this history, as the crises brought on by the neoliberal model continue to amass.”
—J Lyons, student, Salem State University

“Professor Chomsky truly highlights the history of Central America and its people. She reminds us all that forgetting is a clear injustice to such a vibrant culture that has continuously been squashed throughout history.”
—Molly Clark, student, Salem State University

“Aviva Chomsky does the work of helping us unforget the pillage, plunder, and violence rained on Central America by the United States. In-depth research and good storytelling do much to resurrect the devastating stories and history beneath the immigration headlines dominating our news cycle. A necessary and timely contribution.”
—Roberto Lovato, author of Unforgetting: A Memoir of Family, Migration, Gangs, and Revolution in the Americas