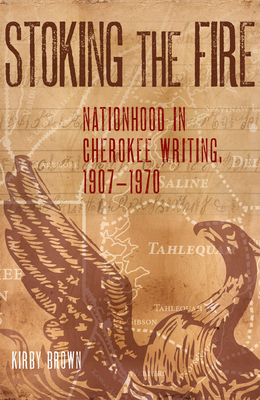 The years between Oklahoma statehood in 1907 and the 1971 reemergence of the Cherokee Nation are often seen as an intellectual, political, and literary "dark age" in Cherokee history. In Stoking the Fire, Kirby Brown brings to light a rich array of writing that counters this view. A critical reading of the work of several twentieth-century Cherokee writers, this book reveals the complicated ways their writings reimagined, enacted, and bore witness to Cherokee nationhood in the absence of a functioning Cherokee state. Historian Rachel Caroline Eaton (1869-1938), novelist John Milton Oskison (1874-1947), educator Ruth Muskrat Bronson (1897-1982), and playwright Rollie Lynn Riggs (1899-1954) are among the writers Brown considers within the Cherokee national and transnational contexts that informed their lives and work. Facing the devastating effects on Cherokee communities of allotment and assimilation policies that ultimately dissolved the Cherokee government, these writers turned to tribal histories and biographies, novels and plays, and editorials and public addresses as alternative sites for resistance, critique, and the ongoing cultivation of Cherokee nationhood. Stoking the Fire shows how these writers--through fiction, drama, historiography, or Cherokee diplomacy--inscribed a Cherokee national presence in the twentieth century within popular and academic discourses that have often understood the "Indian nation" as a contradiction in terms. Avoiding the pitfalls of both assimilationist resignation and accommodationist ambivalence, Stoking the Fire recovers this period as a rich archive of Cherokee national memory. More broadly, the book expands how we think today about Indigenous nationhood and identity, our relationships with writers and texts from previous eras, and the paradigms that shape the fields of American Indian and Indigenous studies.