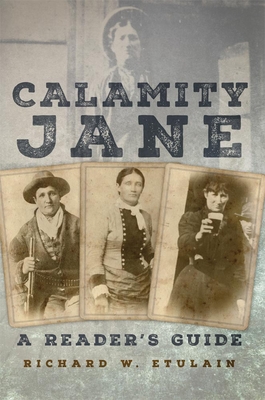 This exhaustive bibliographical reference will be the first stop for anyone looking for Calamity Jane in print, film, or photograph-and wanting to know how reliable those sources may be. Richard W. Etulain, renowned western-U.S. historian and the author of a recent biography of this charismatic figure, enumerates and assesses the most valuable sources on Calamity Jane's life and legend in newspapers, magazines, journals, books, and movies, as well as historical and government archives.

Etulain begins with a brief biography of Martha Canary, aka Calamity Jane (1856-1903), then analyzes the origins and growth of her legends. The sources, Etulain shows, reveal three versions of Calamity Jane. In the most popular one, she was a Wild Woman of the Old West who helped push a roaring frontier through its final stages. This is the Calamity Jane who fought Indians, marched with the military, and took on the bad guys. Early in her life she also hoped to embody the pioneer woman, seeking marriage and a stable family and home. A third, later version made of Calamity an angel of mercy who reached out to the poor and nursed smallpox victims no one else would help.

The hyperbolic journalism of the Old West, as well as dime novels and the stretchers Calamity herself told in her interviews and autobiography, shaped her legends through much of the twentieth century. Many of the sensational early accounts of Calamity's life, Etulain notes, were based on rumor and hearsay. In illuminating the role of the Deadwood Dick dime novel series and other pulp fiction in shaping what we know-or think we know-of the American West, Etulain underscores one of his fascinating themes: the power of popular culture.

The product of twenty years' labor sifting fact from falsehood or distortion, this bibliography and reader's guide includes brief discussions of nearly every item's contents, along with a terse, entertaining evaluation of its reliability.