Junípero Serra, Volume 3: California, Indians, and the Transformation of a Missionary (Before Gold: California Under Spain and Mexico #3) (Hardcover) 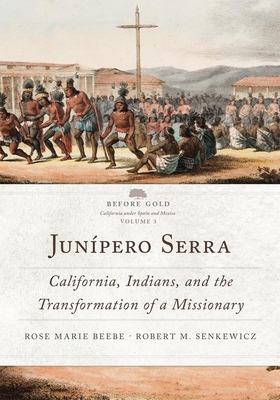 By Rose Marie Beebe, Robert M. Senkewicz
This Book Is Not Sold Online - Inquire In Store
Out of Print


Franciscan missionary friar Jun pero Serra (1713-1784), one of the most widely known and influential inhabitants of early California, embodied many of the ideas and practices that animated the Spanish presence in the Americas. In this definitive biography, translators and historians Rose Marie Beebe and Robert M. Senkewicz bring this complex figure to life and illuminate the Spanish period of California and the American Southwest. In Jun pero Serra: California, Indians, and the Transformation of a Missionary, Beebe and Senkewicz focus on Serra's religious identity and his relations with Native peoples. They intersperse their narrative with new and accessible translations of many of Serra's letters and sermons, which allows his voice to be heard in a more direct and engaging fashion. Serra spent thirty-four years as a missionary to Indians in Mexico and California. He believed that paternalistic religious rule offered Indians a better life than their oppressive exploitation by colonial soldiers and settlers, which he deemed the only realistic alternative available to them at that time and place. Serra's unswerving commitment to his vision embroiled him in frequent conflicts with California's governors, soldiers, native peoples, and even his fellow missionaries. Yet because he prevailed often enough, he was able to place his unique stamp on the first years of California's history. Beebe and Senkewicz interpret Jun pero Serra neither as a saint nor as the personification of the Black Legend. They recount his life from his birth in a small farming village on Mallorca. They detail his experiences in central Mexico and Baja California, as well as the tumultuous fifteen years he spent as founder of the California missions. Serra's Franciscan ideals are analyzed in their eighteenth-century context, which allows readers to understand more fully the differences and similarities between his world and ours. Combining history, culture, and linguistics, this new study conveys the power and nuance of Serra's voice and, ultimately, his impact on history.