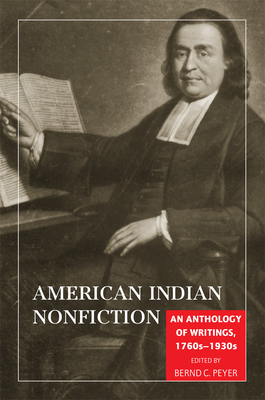 By Bernd C. Peyer (Editor)
This Book Is Not Sold Online - Inquire In Store

A survey of two centuries of Indian political writings

American Indian literature has deep roots. This collection of political writings covers nearly two centuries and represents a historical survey of the development of Indian nonfiction prose, from the missionary-trained writers of the late eighteenth century to the members of the first Indian intellectual network in the early twentieth century.

Included are personal letters, sermons, printed speeches, autobiographical sketches, editorials, pamphlets, and humorous pieces. From early writers such as Samson Occom to twentieth-century writers such as Will Rogers and Luther Standing Bear, these authors were deeply committed to the welfare of their Native communities. Many of the pieces were quite popular in their day but have been lost to time.

Bernd C. Peyer traces the historical development of Indian literature from its beginnings in seventeenth-century New England to the emergence of the national Society of American Indians. This collection shows that American Indian prose has a long and diverse heritage. While not as well known as its counterparts in fiction and poetry, Native nonfiction writing posed probing questions, expressed political beliefs, and confronted the challenges facing Indian-white relations. Many of the documents Peyer has gathered here are otherwise inaccessible to the general public, making this anthology a valuable and unique resource for scholars, students, and anyone interested in Indian nonfiction.