Spain in the Southwest: A Narrative History of Colonial New Mexico, Arizona, Texas, and California (Paperback) 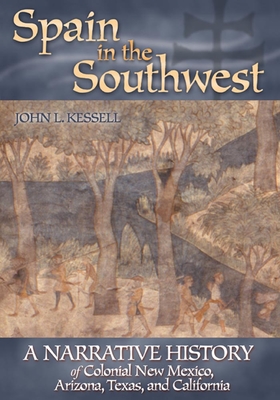 John L. Kessell's Spain in the Southwest presents a fast-paced, abundantly illustrated history of the Spanish colonies that became the states of New Mexico, Arizona, Texas, and California. With an eye for human interest, Kessell tells the story of New Spain's vast frontier--today's American Southwest and Mexican North--which for two centuries served as a dynamic yet disjoined periphery of the Spanish empire.

Chronicling the period of Hispanic activity from the time of Columbus to Mexico's independence from Spain in 1821, Kessell traces the three great swells of Hispanic exploration, encounter, and influence that rolled north from Mexico across the coasts and high deserts of the western borderlands. Throughout this sprawling historical landscape, Kessell treats grand themes through the lives of individuals. He explains the frequent cultural clashes and accommodations in remarkably balanced terms. Stereotypes, the author writes, are of no help. Indians could be arrogant and brutal, Spaniards caring, and vice versa. If we select the facts to fit preconceived notions, we can make the story come out the way we want, but if the peoples of the colonial Southwest are seen as they really were--more alike than diverse, sharing similar inconstant natures--then we need have no favorites.