Poem of the Cid: A Modern Translation with Notes by Paul Blackburn (Paperback) 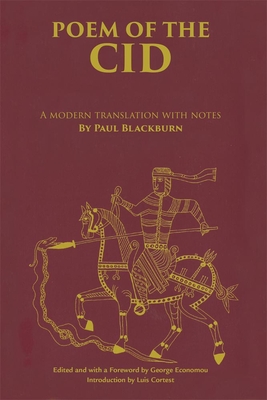 By Paul Blackburn, George Economou (Editor), Luis Cortest (Introduction by)
This Book Is Not Sold Online - Inquire In Store

Few works have shaped a national literature as thoroughly as the Poem of the Cid has shaped the Spanish literary tradition. Tracing the life of the eleventh-century military commander Rodrigo Diaz de Vivar, called El Cid (from the Arabic Sayyidi, "My Lord"), this medieval epic describes a series of events surrounding his exile. The text of the poem survives in only one early-thirteenth-century manuscript copied by a single scribe, yet centuries later the figure of the Cid still was celebrated in the Spanish popular ballad tradition. Today almost every theme that characterizes Spanish literature-honor, justice, loyalty, treachery, and jealousy-derives from the Poem of the Cid. Restored by poet and medievalist George Economou, this elegant and spirited translation by Paul Blackburn is judged by many the finest English translation of a great medieval poem. Paul Blackburn was among the foremost American poets and translators of the twentieth century. George Economou is Professor Emeritus of English at the University of Oklahoma. Luis Cortest is Professor of Modern Languages and Literature at the University of Oklahoma. "After decades of circulating in photocopies, the legendary Blackburn Cid has finally arrived, livelier than ever, unmistakable, and impossible not to read aloud. This is what epics were for: the wisdom of the tribe as sheer aural entertainment."-Eliot Weinberger.