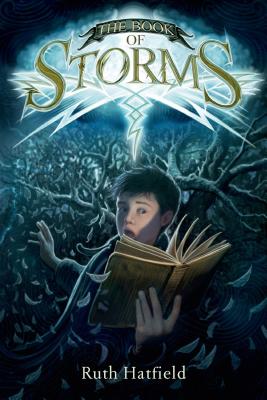 By Ruth Hatfield, Greg Call (Illustrator)
This Book Is Not Sold Online - Inquire In Store
Out of Print

This is book number 1 in the The Book of Storms Trilogy series.

Eleven-year-old Danny O'Neill has never been what you'd call adventurous. But when he wakes the morning after a storm to find his house empty, his parents gone, and himself able to hear the thoughts of a dying tree, he has no choice but to set out to find answers. He soon learns that the enigmatic Book of Storms holds the key to what he seeks . . . but unraveling its mysteries won't be easy. If he wants to find his family, he'll have to face his worst fears and battle terrifyingly powerful enemies, including the demonic Sammael himself.
In the beautifully imagined landscape of Ruth Hatfield's The Book of Storms, magic seamlessly intertwines with the everyday, nothing is black and white, and Danny is in a race against time to rescue everything he holds dear.

Greg Call is a Society of Illustrators award-winning artist best known for illustrating the Starcatchers and Neverland book series.

“The gripping pace and complex moral musings pair with a setting that is so vividly described that it becomes a character itself. Readers will eagerly anticipate the next volume in this anticipated trilogy.” —BCCB

“The extraordinary comes out from hiding behind the ordinary in Hatfield's debut novel . . . This fanciful book brings new awareness of the natural world.” —VOYA

“* Hatfield doesn’t shy from depicting violent deaths or the occasional bit of gore, but the story is never gratuitous—the frights are just enough to keep readers’ hearts racing as they read late into the night.” —Publishers Weekly

“Readers will truly root for the protagonist and find very relatable characteristics within the villainous Sammael...The true beauty of this tale lies in the personification that runs throughout the entirety of the novel.” —School Library Journal