Arc of Justice: A Saga of Race, Civil Rights, and Murder in the Jazz Age (Paperback) 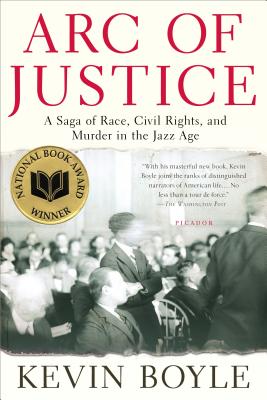 In 1925, Detroit was a smoky swirl of jazz and speakeasies, assembly lines and fistfights. The advent of automobiles had brought workers from around the globe to compete for manufacturing jobs, and tensions often flared with the KKK in ascendance and violence rising. Ossian Sweet, a proud Negro doctor-grandson of a slave-had made the long climb from the ghetto to a home of his own in a previously all-white neighborhood. Yet just after his arrival, a mob gathered outside his house; suddenly, shots rang out: Sweet, or one of his defenders, had accidentally killed one of the whites threatening their lives and homes.

And so it began-a chain of events that brought America's greatest attorney, Clarence Darrow, into the fray and transformed Sweet into a controversial symbol of equality. Historian Kevin Boyle weaves the police investigation and courtroom drama of Sweet's murder trial into an unforgettable tapestry of narrative history that documents the volatile America of the 1920s and movingly re-creates the Sweet family's journey from slavery through the Great Migration to the middle class. Ossian Sweet's story, so richly and poignantly captured here, is an epic tale of one man trapped by the battles of his era's changing times.

Arc of Justice is the winner of the 2004 National Book Award for Nonfiction.

Kevin Boyle, a professor of history at Ohio State University, is the author of Arc of Justice: A Saga of Race, Civil Rights, and Murder in the Jazz Age and The UAW and the Heyday of American Liberalism, 1945-1968. A former associate professor at the University of Massachusetts, he is also the recipient of fellowships from the Guggenheim Foundation, the National Endowment for the Humanities, and the American Council of Learned Societies.
He lives in Bexley, Ohio.

“Dr. Ossian Sweet bought a house in a white neighborhood in 1925. Detroit exploded as a result, and a largely forgotten, yet pivotal, civil rights moment in modern American history unfolded. Kevin Boyle's vivid, deeply researched Arc of Justice is a powerful document that reads like a Greek tragedy in black and white. The lessons in liberty and law to be learned from it are color blind.” —David Levering Lewis, Pulitzer Prize-winning biographer of W. E. B. Du Bois

“Arc of Justice perfectly illustrates why W.E.B. Du Bois insisted that a keen sense of drama and tragedy is the ally, not the enemy, of clear-eyed historical analysis of race in U.S. history. By turns a crime story and a gripping courtroom drama, a family tale and a stirring account of resistance, an evocation of American dreams and a narration of American violence, Boyle's study takes us to the heart of interior lives and racist social processes at a key juncture in U.S. history.” —David Roediger, Babcock Professor of African American Studies and History, University of Illinois, author of Colored White: Transcending the Racial Past

“What a powerful and beautiful book! Kevin Boyle has done a great service to history with Arc of Justice. With deep research and graceful prose, he has taken a single moment, the hot September day in 1925 when Ossian and Gladys Sweet moved into a bungalow on Garland Avenue in Detroit, and from that woven an amazing and unforgettable story of prejudice and justice at the dawn of America's racial awakening.” —David Maraniss, winner of the Pulitzer Prize and author of They Marched Into Sunlight and When Pride Still Mattered

“There are many hidden and semi-hidden and half-forgotten markers of the civil rights movement. Kevin Boyle's careful, detailed study of a 1925 murder trial in Detroit is one such precursing marker. Arc of Justice is a necessary contribution to what seems like an insoluble moral dilemma: race in America.” —Paul Hendrickson, author of Sons of Mississippi: A Story of Race and Its Legacy

“A welcome book on an important case. In Kevin Boyle's evocative account, the civil rights saga of Gladys and Ossian Sweet finally has the home it has long deserved.” —Philip Dray, author of At the Hands of Persons Unknown: The Lynching of Black America

“Arc of Justice is one of the most engrossing books I have ever read. It is, at once, a poignant biography, a tour-de-force of historical detective work, a gripping courtroom drama, and a powerful reflection on race relations in America. Better than any historian to date, Kevin Boyle captures the tensions of the Jazz Age: a period that witnessed the rebirth of the Ku Klux Klan and the flowering of the Harlem Renaissance; the clampdown on immigration and the emergence of an ethnic insurgency; the crystallization of racial segregation both north and south and the rise of the modern civil rights movement. The troubled and exciting history of America in the 1920s comes alive in his vivid portraits of striving black physician Ossian Sweet, charged with murder; Sweet's brilliant legal team led by the incomparable Clarence Darrow; his tireless advocates James Weldon Johnson and Walter White; and trial judge and future Supreme Court justice Frank Murphy. Arc of Justice is a masterpiece.” —Thomas J. Sugrue, Bicentennial Class of 1940 Professor of History, University of Pennsylvania, author of the Bancroft Prize-winning, Origins of the Urban Crisis