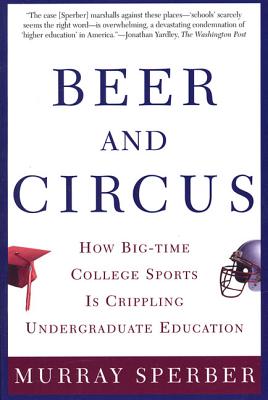 Beer and Circus presents a no-holds-barred examination of the troubled relationship between college sports and higher education from a leading authority on the subject.

Murray Sperber turns common perceptions about big-time college athletics inside out. He shows, for instance, that contrary to popular belief the money coming in to universities from sports programs never makes it to academic departments and rarely even covers the expense of maintaining athletic programs. The bigger and more prominent the sports program, the more money it siphons away from academics.

Sperber chronicles the growth of the university system, the development of undergraduate subcultures, and the rising importance of sports. He reveals television's ever more blatant corporate sponsorship conflicts and describes a peculiar phenomenon he calls the "Flutie Factor"--the surge in enrollments that always follows a school's appearance on national television, a response that has little to do with academic concerns. Sperber's profound re-evaluation of college sports comes straight out of today's headlines and opens our eyes to a generation of students caught in a web of greed and corruption, deprived of the education they deserve.
Sperber presents a devastating critique, not only of higher education but of national culture and values.

Beer and Circus is a must-read for all students and parents, educators and policy makers.

“It is hard to read Sperber's book without having a sinking feeling about the future of American culture. He has managed to document our national decline in painstaking detail, and the result is an admirable, timely and profoundly disturbing work.” —The New York Times Book Review

“'Beer and Circus' does a terrific job of illustrating how collegiate sports has shielded the decline in education from public scrutiny. . . .[I]t is a powerful and important book.” —The Chicago Tribune