The Heroes of Olympus, Book Five: The Blood of Olympus (CD-Audio) 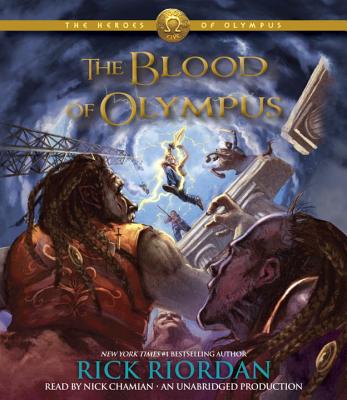 By Rick Riordan, Nick Chamian (Read by)
This Book Is Not Sold Online - Inquire In Store
Not In Stock/Special Order

Though the Greek and Roman crewmembers of the Argo II have made progress in their many quests, they still seem no closer to defeating the earth mother, Gaea. Her giants have risen-all of them-and they're stronger than ever. They must be stopped before the Feast of Spes, when Gaea plans to have two demigods sacrificed in Athens. She needs their blood-the blood of Olympus-in order to wake.

The Athena Parthenos will go west; the Argo II will go east. The gods, still suffering from multiple personality disorder, are useless. How can a handful of young demigods hope to persevere against Gaea's army of powerful giants? As dangerous as it is to head to Athens, they have no other option. They have sacrificed too much already. And if Gaea wakes, it is game over.

Rick Riordan is the #1 New York Times bestselling author of the Percy Jackson and the Olympians series, the Kane Chronicles, and the Heroes of Olympus. He is also the author of the multi-award-winning Tres Navarre mystery series for adults.

For fifteen years, Rick taught English and history at public and private middle schools in the San Francisco Bay Area and in Texas. In 2002, Saint Mary's Hall honored him with the school's first Master Teacher Award.

While teaching full time, Riordan began writing mystery novels for grownups. His Tres Navarre series went on to win the top three national awards in the mystery genre - the Edgar, the Anthony and the Shamus. Riordan turned to children's fiction when he started The Lightning Thief as a bedtime story for his oldest son.

Today over 35 million copies of his Percy Jackson, Kane Chronicles, and Heroes of Olympus books are in print in the United States, and rights have been sold into more than 35 countries. Rick is also the author of The 39 Clues: The Maze of Bones, another #1 New York Times bestseller.

Rick Riordan now writes full-time. He lives in Boston with his wife and two sons.