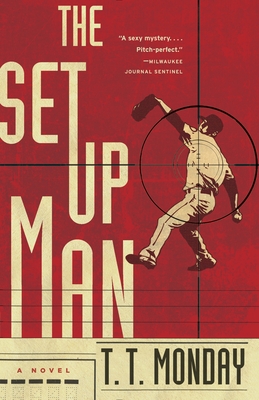 This is book number 1 in the Johnny Adcock Series series.

Johnny Adcock is an aging Major League pitcher, who moonlights as a private investigator. Major League Baseball, as it turns out, is a prime source of employment for a discreet detective who has both the brains and the brawn to handle the unique problems of professional athletes. On the bus after a game, teammate Frankie Herrera confides in Adcock that he has a “problem with his wife.” It sounds like the standard story of a pro athlete’s marriage gone sour. However, when Frankie dies in a car crash, Adcock knows there are way too many questions still unanswered, and he dives head first into the most dangerous investigation of his budding second career.

"Don’t shy away from this mystery if you’re not a baseball fan. The industry is seamlessly interwoven into the story and you’ll pick up all you need to know without any effort. If you are a baseball fan, dive in headfirst....This is the author’s first thriller, but I hope it’s not his last."--Suspense Magazine

"Monday has a “Dragnet”-like, just-the-facts style and offers lots for baseball fans to enjoy as well.'"--New York Post

"Monday delivers an all-star performance with this series debut. Here’s hoping that Adcock has a more than a few innings left in him."--The Chronicle-Herald (Halifax)

" Monday’s plot is inventive, but it’s the verisimilitude of Adcock’s baseball life that makes this one a delight. Adcock is a solid MLB citizen. . . . Here’s hoping he has many more seasons and many more cases."--Booklist, Starred review

"A throwback Southern California mystery in modern pinstripes....A treat for readers of mystery or baseball novels, this debut will be especially enjoyable for fans of both." --Kirkus Reviews