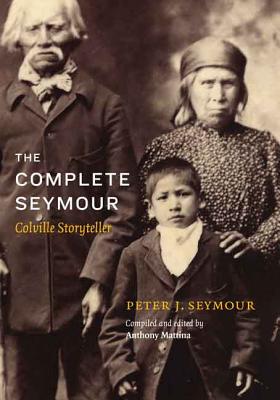 Peter J. Seymour was a Salish storyteller. He carried forward earlier tales of elders along with his own experiences as fewer and fewer native speakers were sharing the Colville-Okanagan language and oral literature. To thwart the demise of this language, over the course of a decade he passed along Salish stories not only to his family but also to linguist Anthony Mattina.
The Complete Seymour: Colville Storyteller includes Seymour’s tales collected in the late 1960s and early 1970s, before his death. It documents Seymour’s rich storytelling and includes detailed morphological analyses and translations of this endangered language. This collection is an important addition to the canon of Native American narratives and literature and an essential volume for anyone studying Salish languages and linguistics.

Peter J. Seymour was a farmer, family man, hunter, jockey, and storyteller. Anthony Mattina is a professor of linguistics, emeritus, at the University of Montana–Missoula. He is the author of Colville-Okanagan Dictionary and the editor and co-translator (with Madeline DeSautel) of The Golden Woman: The Colville Narrative of Peter J. Seymour. Madeline DeSautel (1888–1979) was a native speaker of Colville-Okanagan. She and Anthony Mattina have co-translated two publications.

"This collection is an important addition to the canon of Native American narratives and literature and an essential volume for anyone studying Salish languages and linguistics."—Society for the Study of the Indigenous Languages of the Americas

"The volume shows the value of deep engagement, of Seymour with his own elders and ancestral narrative traditions and of Mattina with the community of indigenous scholars and storytellers."—Bruce Granville Miller, Pacific Northwest Quarterly

“For nearly half a century Tony Mattina has been one of those extremely rare scholars to stick with the narrative legacy of a single mysterious, master storyteller, whose genius and wisdom he serves up in this career-culminating book. Working in close auspices with the Colville-Okanagan communities of Washington State and British Columbia, Mattina [has] . . . produced this stunning and original anthology of their collective imagination, as filtered through the old, old stories of the now-deceased sage, Peter Seymour. [It is] one of those quiet triumphs that took one humanistic spirit from academia to unearth, translate, and contextualize the genius of another humanistic spirit from another cultural world.”—Peter Nabokov, author of Where the Lightning Strikes: The Lives of American Indian Sacred Places