How to Cook a Tapir: A Memoir of Belize (At Table ) (Paperback) 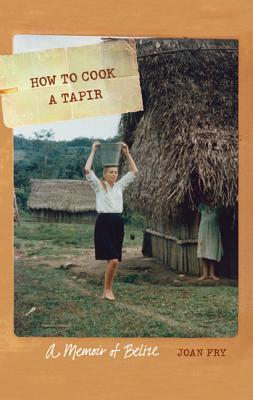 In 1962 Joan Fry was a college sophomore recently married to a dashing anthropologist. Naively consenting to a year-long “working honeymoon” in British Honduras (now Belize), she soon found herself living in a remote Kekchi village deep in the rainforest. Because Fry had no cooking or housekeeping experience, the romance of living in a hut and learning to cook on a makeshift stove quickly faded. Guided by the village women and their children, this twenty-year-old American who had never made more than instant coffee eventually came to love the people and the food that at first had seemed so foreign. While her husband conducted his clinical study of the native population, Fry entered their world through friendships forged over an open fire. Coming of age in the jungle among the Kekchi and Mopan Maya, Fry learned to teach, to barter and negotiate, to hold her ground, to share her space—and she learned to cook. This is the funny, heartfelt, and provocative story of how Fry painstakingly baked and boiled her way up the food chain, from instant oatmeal and flour tortillas to bush-green soup, agouti (a big rodent), gibnut (a bigger rodent), and, finally, something even the locals wouldn’t tackle: a “mountain cow,” or tapir. Fry’s effort to win over her neighbors and hair-pulling students offers a rare and insightful picture of the Kekchi Maya of Belize, even as this unique culture was disappearing before her eyes.

Joan Fry is the author of Backyard Horsekeeping: The Only Guide You’ll Ever Need and the coauthor of The Beginning Dressage Book.

“Here is the very unsentimental education of an American bride, who is extraordinarily quick and bright but ordinarily squeamish about dirt, bugs, bare breasts, and chicken feet in her tamale. Her transformation into a woman who can cook on a stove made of river stones, pave a dirt floor with a paste of ash, slice a tarantula with a machete, and bond with her Maya neighbors even as she cools toward her anthropologist husband is stunningly honest, moving, and convincing. This is a memoir that ‘broadens’ in the way that travel is supposed to, and the recipes woven through the narrative are simple, exotic, and enticing. Now if only I could find a tapir . . .”—Janet Burroway, author of Writing Fiction: A Guide to Narrative Craft and Bridge of Sand

“Reading and relishing Joan Fry’s wonderfully vivid memoir of her time among the Maya, I can almost smell the ripe mangos on the ground and the smoke of the Colonials in the air. I can taste the escabeche and tortillas. How to Cook a Tapir brings Belize to life.”—Lan Sluder, author of Fodor’s Belize 2008 and publisher of the on-line magazine Belize First

“How to Cook a Tapir has detailed instructions for foods that are fun to read about as well as foods that are easy to cook and delicious. Sesame Coconut Crunch, Cilantro Stewed Chicken, and Bush Greens and Garbanzos can all be made with ingredients from any American supermarket. And for those who have a tapir and wish to cook it, that recipe is there too. Like Osa Johnson's great classic I Married Adventure, and Tracy Johnston’s Shooting the Boh, Joan Fry's How to Cook a Tapir is the story of an adventurous woman whose travels teach her as much about herself as they do about the culture she encounters.”—Denise Landis, former anthropologist and author of the New York Times cookbook Dinner for Eight: 40 Great Dinner Party Menus for Friends and Family.

“In the tradition of Eat, Pray, Love and Tales of a Female Nomad comes Joan Fry’s toothsome and transformational adventure. What a wonderful journey; garnish with samat!”—Sandra Tsing Loh, author of Mother on Fire

“Joan Fry’s unique experiences as a young and naïve newlywed in 1960 British Honduras shine through in her memoir, How to Cook a Tapir.”—Jennifer Hotop, Big Muddy