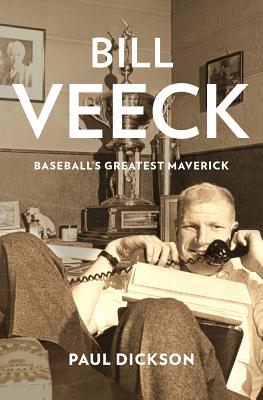 William Louis "Bill" Veeck, Jr. (1914-1986) is legendary in many ways-baseball impresario and innovator, independent spirit, champion of civil rights in a time of great change. Paul Dickson has written the first full biography of this towering figure, in the process rewriting many aspects of his life and bringing alive the history of America's pastime. In his late 20s, Veeck bought into his first team, the American Association Milwaukee Brewers. After serving and losing a leg in WWII, he bought the Cleveland Indians in 1946, and a year later broke the color barrier in the American League by signing Larry Doby, a few months after Jackie Robinson-showing the deep commitment he held to integration and equal rights. Cleveland won the World Series in 1948, but Veeck sold the team for financial reasons the next year. He bought a majority of the St. Louis Browns in 1951, sold it three years later, then returned in 1959 to buy the other Chicago team, the White Sox, winning the American League pennant his first year. Ill health led him to sell two years later, only to gain ownership again, 1975-1981. Veeck's promotional spirit-the likes of clown prince Max Patkin and midget Eddie Gaedel are inextricably connected with him-and passion endeared him to fans, while his feel for the game led him to propose innovations way ahead of their time, and his deep sense of morality not only integrated the sport but helped usher in the free agency that broke the stranglehold owners had on players. (Veeck was the only owner to testify in support of Curt Flood during his landmark free agency case). Bill Veeck: Baseball's Greatest Maverick is a deeply insightful, powerful biography of a fascinating figure. It will take its place beside the recent bestselling biographies of Satchel Paige and Mickey Mantle, and will be the baseball book of the season in Spring 2012.

Paul Dickson is the author of several classic baseball books, including The Dickson Baseball Dictionary, The Unwritten Rules of Baseball, The Hidden Language of Baseball, and The Joy of Keeping Score. He is also the author of the classic narrative history Sputnik: The Shock of the Century, and the co-author of the acclaimed The Bonus Army: An American Epic. He lives in Garrett Park, Maryland.

Dickson has also been awarded the Henry Chadwick Award from the Society for Baseball Research for 2012 for his lifetime achievements as a baseball researcher and  scholar. In 2011 Dickson won the Tony Salin Award from the Baseball Reliquary for his contributions to the preservation of the history of the game.

"Veeck was a one of a kind whose impact reached beyond the ballpark, into the very fiber of 20th-century America. Dickson has captured it all in entertaining fashion."—James Bailey, Baseball America "Paul Dickson’s excellent biography Bill Veeck: Baseball’s Greatest Maverick is among the few great biographies set in sports. Beyond that it is the story of a singular fellow whose energy, determination, wit, and powerful commitment to fairness spiced with an unquenchable sense of the absurd enabled him to live an exceptionally full and passionate life."—Bill Littlefield, The Boston Globe "In this crisply written, admiring but never fawning chronicle, Dickson makes a strong case for Veeck as the most influential baseball executive who ever lived. He was certainly the most entertaining."—Marc Mohan, The Portland Oregonian "One outstanding question hangs over Paul Dickson’s new biography, Bill Veeck, Baseball’s Greatest Maverick: Why did it take so long for the most colorful and perhaps most influential figure in baseball history to get a definitive biography? Probably because it took more than 20 years after Veeck’s death (in 1986) to put all the facets of his amazing life together. Dickson, author of several superb baseball books, including The Dickson Baseball Dictionary and Baseball is… Defining the National Pastime, has done more than write the best baseball biography so far this decade. He’s written an important piece of baseball history." —Allen Barra, The Chicago Tribune

"In his lively (and occasionally beatific) biography, baseball and cultural historian Paul Dickson brings Veeck to life, relentlessly digging into his career and times to create a portrait of the kind of guy you'd like to have in your corner - or at your table for a drink." – Chris Foran, Milwaukee Journal-Sentinel

"I was vastly entertained by Paul Dickson's biography of Bill Veeck, the wild man baseball impresario from Chicago. In addition to being an authoritative chronicle of how the game used to be in that halcyon fifty years between 1930 and 1980, it also gives off a reminiscent aura of grass outfields,the comforting feel of a hard bleacher seat, and airmade redolent of popcorn and tobacco. … One of the strong points of this book is the easy-reading, yet knowledgeable voice of the author."—Jim Srodes, American Spectator

"Bill Veeck is as good as it gets when it comes to describing an American original. FIVE STARS."—Budd Bailey, Sports Book Review Center  “The best place to start is to say that I‘ve probably never had as much fun reading a book.  Nor have I ever interrupted my reading so many times to regale my family with passages and anecdotes.  If you haven’t picked this book up yet, the time is now.  If you are a baseball fan, a humanitarian, a history buff, someone who enjoys a good story, you’ll have a hard time putting it down."—David Karpinski, Baseball Roundtable “Dickson deftly captures this complex character, whose legacy reflects both Eddie Gaedel and Larry Doby, hucksterism and heroics.”—Steve Roberts, The Washington Post