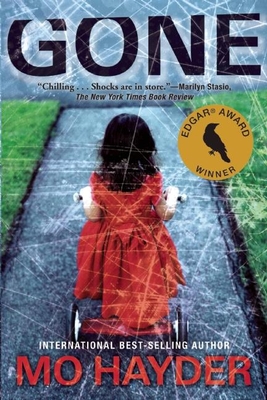 By Mo Hayder
$16.00
On Our Shelves Now - Please allow up to 48-hours for Curbside Pickup orders to be processed.

“Mo Hayder's gritty, intense thriller series featuring detectives Jack Caffery and Flea Marley is a must for anyone who likes breakneck timing and detectives who walk on the dark side. In Gone, an apparent carjacking turns into a kidnapping, then becomes even more sinister. While the detectives race against time to find the perpetrator before he strikes again, dark events from Flea's past threaten to overwhelm them both.”
— Carol Schneck, Schuler Books & Music, Okemos, MI

Now available in paperback from one of the most acclaimed authors in the thriller genre--praised as a "maestro of the sinister" by the New York Daily News--Mo Hayder delivers her most excruciatingly suspenseful novel to date. By turns thrilling and horrifying, Gone follows the investigation of a brilliant and twisted carjacker with a disturbing game to play. Detective Jack Caffery's newest case seems like a routine carjacking, a crime he's seen plenty of times before until he realizes the sickening truth: the thief wasn't after the car, but the 11-year-old girl in the backseat. Meanwhile police diver Sergeant Flea Marley is pursuing her own theory of the case, and what she finds in an abandoned, half-submerged tunnel could put her in grave danger. The carjacker is always a step ahead of the Major Crime Investigation Unit, and as the chances for his victims grow slimmer, Jack and Flea race to fit the pieces together in time. Gone is Mo Hayder at her terrifying best. Each dark and captivating twist reveals a new dimension to this tight-knit plot, burrowing deeper into the chilling and clever world Mo Hayder creates.

The very best thing a writer can do is to thoroughly and completely immerse the reader in a strange new world. Mo Hayder does it to perfection”Michael Connelly

"Mo has a profound ability to shock and surprise her readers She's the bravest writer I know"Karin Slaughter, author of Broken

I stand in awe of Mo Hayder's incomparable gifts as a storyteller.”Tess Gerritsen, author of the Rizzoli & Isles thrillers

The elaborate shock effects that define Hayder’s savage style ultimately serve their purpose in a novel that taps into the current fascination with all things supernatural and questions our assumptions about a number of subjects, from faith healing to cultish religious groups and society’s definition of evil.” Marilyn Stasio, The New York Times Book Review

Hayder shows herself to be a maestro of the sinister.” New York Daily News

Riveting . . . Hayder keeps the tension high. . . . The meticulously crafted plot is heightened by Hayder’s skillful evocation of mood as she summons the specter of a highly intelligent criminal who is taking great satisfaction from every parent’s worst nightmare. A captivating thriller.” Booklist (starred review)

Hayder writes some of the most carefully plotted, gripping and downright scary books in the mystery genre, and Gone continues that tradition in fine form.”Bruce Tierney, Bookpage

Mo Hayder’s gritty, intense thriller series featuring detectives Jack Caffery and Flea Marley is a must for anyone who likes breakneck timing and detectives who walk on the dark side.”Carol Schneck, The Daily News

A brilliantly plotted mystery that keeps you guessing not only who the villain is, but what exactly he's after . . . First-rate mystery that takes full advantage of the wintry, moonlit West Country and the unusual skills of its lady diver.” Kirkus Reviews

A carjacking goes from bad to horrifying in Hayder’s gripping fifth thriller.Hayder expertly brings to life the claustrophobia of Flea’s dives and the emotional burden of the case on Jack.” Publishers Weekly

With her latest, Gone, Mo Hayder takes you to the edge, then pushes you over in a heart-pounding rush of a story that will leave you battered and bruised, and wanting more.” Chevy Stevens, New York Times bestselling author of Still Missing

Gone, [Hayder’s] latest novel published in America, is one of those books that dares you to put it down once you’ve started reading and then challenges you to forget it once you have finished. The only way you can read Gone without having every nerve in your body jumping and screaming is if you are not paying attention. . Hayder is a storyteller par excellence[who] continues to drop charges into the water until practically the last paragraph. If you have read her previous works, you know what I’m talking about. If you’re new to her craftsmanship, read Gone and be enthralled. Strongly recommended.” Joe Hartlaub, Bookreporter.com

Twisty, fast-moving and often creepy While Hayder does a bang-up job larding her page-turning plot with blind alleys and unexpected curves, it is her in-depth character portrayals, especially of the mothers of the missing girls, that give the novel its depth and complexity.”Debra Ginsberg, Shelf Awareness (online)

The reader is kept rapt for more or less the first half of the book just by the mystery of the identity of the hijacker, and what he may have done to the child [shudder]. Then there is a sudden shift in intensity, as the plot takes unexpected and quite startling twists and turns, and from that point on I could not put the book down till its conclusion, breath held a good part of the way there.” Murder by Type (online)

I deduced that this was yet another suspense story about vanished children. If it's possible for a subject to be, at once, horrifying and humdrum, this is the oneBut when I started reading, I discovered that the thing I was most dreading - that hoary plot - turned out to be the novel's greatest pleasureIt's a tribute to Hayder's powers as a suspense writer that she completely turns the over-familiar premise of this novel inside out and upside down. The more pages of Gone that we captivated readers turn, the farther away we get from cliched thriller conventions.”Maureen Corrigan, The Washington Post

Hayder keeps getting betterThis is an incredibly gripping story that makes one snatch any opportunity to read even a page or two and to stay up late to reach the satisfying conclusion.” Joe Strebel, Anderson’s Bookshop, Naperville, IL

Gone is a classic tension-filled thriller, elevated by Hayder’s characterization and her facility with description The final pages bring surprising revelations and the story ends with a shocking bang.”Leslie Doran, Mystery Science Magazine

Where she differs from her peers is her almost outlandish imagination. Hayder pushes the boundaries of what’s been said and written before Brilliantly perceptive portrayals of the victims and very clever, sympathetic plotting, not to mention an acute capturing of police procedure - Gone is Mo Hayder’s most compulsive thriller yet.” Daily Mirror (UK)

Anyone who enjoys intelligent, well-crafted plots and efficient, glowing writing will enjoy Mo Hayder. This is the fifth book in the Jack Caffery series and could well be the best. Mo Hayder raises the bar high when it comes to crime fiction and she’s done it again with this clever, stomach-churning, fast-paced, top-notch thriller.”
Sunday Express (UK)

She jolted the often-sedate world of police-procedural fiction with an unabashed readiness to gaze at the Gorgon of human behaviour; and detail it while pulling no punches” The Independent (UK)

Mo Hayder’s speciality, from her bleak and brilliant debut Birdman on, has been a particularly potent blend of terror and horror to create a suspense that not only grips her readers by the scruff of the neck but takes a firm hold on their intestines, too.” The Times (UK)

Her latest thriller serves up a fast-paced storyline that will see you racing through the pages.” The Edinburgh Evening News

They call her the queen of hardcore in high heels.’ The beautiful and terrifying Mo Hayder, since The Devil of Nanking, has honed her sense of narrative and sculpted her obsession with evil.[In Gone,] she delivers a message unsettling to all: the whole world, yes, anyone can be prey.” Le Point Magazine (France)

[A] chilling thriller . . . Hayder captures the claustrophobia of Flea's dives in unsettling detail and continues to build on her two damaged heroes.”Publishers Weekly (starred review)

[A] high-octane thriller . . . Hayder's grasp of . . . forensic detail . . . rivals P.D. James'. . . . Hayder has created conscientious and valiant figures in Marley and Caffery, whose disturbing human failings have the paradoxical effect of making readers trust and root for them. Nice work once again from one of the most dependable pros in the murder business.”Kirkus Reviews

"Hayder is not a subdued writer. Her characters are almost as chilling as the horrors that they are investigating Macabre, yes, but also absorbing and hugely entertaining." The Times (UK)