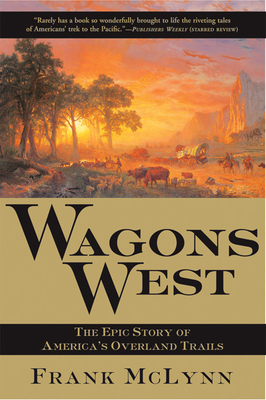 In what The Washington Post has called "fascinating," Frank McLynn has penned a year-by-year account of the pioneering efforts to conquer and settle the American West. Wagons West is a stirring history of the years from 1840 to 1849--the years between the era of the fur trappers and the beginning of the gold rush. In all the sagas of human migration, few can top the drama of the journey by Midwestern farmers to Oregon and California in those years. Although they used mountain men as guides, they went almost literally into the unknown, braving dangers from hunger, thirst, disease, and drowning. Using original diaries and memoirs, McLynn "provides intimate, perceptive insights into that time"(The Baltimore Sun) and underscores the incredible heroism and dangerous folly on the overland trails. His well-informed and authoritative narrative investigates the events leading up to the opening of the trails, the wagons and animals used by the pioneers, the role of women, relations with Native Americans, and much else. The climax arrives in McLynn's expertly re-created tale of the dreadful Donner party, and he closes with Brigham Young and the Mormons beginning communites of their own. Full of high drama, tragedy, and triumph, it brilliantly chronicles one of the principal chapters in the creation of the United States as we know it today. The Anglo-Americans were the last people to arrive in the West. The British had penetrated the Oregon Territory, the Spanish had occupied Arizona, New Mexico, Texas, and California, and even the Russians and Chinese had traveled to the Pacific seaboard. But until the 1840s, the West was a mere backwater in the life of the United States. The U.S. interest in the West didn't begin until the 1840s, years after the Lewis and Clark expedition, commissioned by the US President Thomas Jefferson after he purchased the Louisiana Territory from Napoleon in 1803. This new territory doubled the size of the United States, and Lewis and Clark were to explore the newly acquired and unfamiliar land. However, exploring the vast area between the Mississippi and the Pacific was largely the work of the "mountain men," who between 1820 and 1840 reconnoitered the routes that would later be recognized as the Santa Fe, California, and Oregon trails. Whereas in 1841 just thirty-four people had made it overland to California and in 1842 a mere 125 had reached Oregon, in 1844 1,528 people reached the west coast on the Oregon and California trails. Though the 1844 emigrants were very well organized and equipped, they faced problems no previous Pacific-bound emigrants had had to contend with: torrential rain and tremendous flooding. Having scarcely survived the high waters, the originally combined Oregon-bound and California-bound parties decided to go their separate ways at Fort Laramie. The Oregon-bound party then endured many deaths from disease, and largely degenerated into a free-for-all, with individual riders heading as fast as their horses would take them for the Columbia River. Though the first snows were not expected for a month, they came unseasonably early and caused starvation. One group did however get safely over the Blue Mountains. Around the same time, the Stephens-Murphy party reached Sutter's Fort and was subsequently the first party to prove that wagons could be taken all the way to the Pacific Coast in California. The Donner party unknowingly headed into the most unimaginable disaster. Moving too slowly to avoid the coming snowstorms, the Donner party proceeded without maps, direct trails or guides. After weeks of starvation due to the snow, members of the Donner party began to discuss cannibalism as an option. Those who did not survive the starvation were eaten by some of the survivors. When relief parties finally found the survivors, they learned to their horror that some of the party's members, including infants and children, had been murdered for their flesh. But the press purposely silenced and suppressed news of the Donner party so as not to discourage overland pioneers. By the time the news reached the Midwest it was too late to deter the emigrants of 1847, and by 1848 the gold strike in California had swept aside all other considerations. The most dramatic emigration of 1847 was that of the Mormons from Illinois to their new Zion in Oregon. Joseph Smith, the founder of Mormonism, was killed by a mob of anti-Mormon militiamen in June of 1844. Brigham Young, one of his appointed "apostles," became the new leader of the Mormons after his death. In March of 1846 he led 5,000 Mormon emigrants on their westward trail. To ensure the loyalty of the Mormons in territory that was still technically Mexican, President Polk demanded that the Mormons furnish a battalion of five hundred men to serve in the Mexican war, specifically to march against Santa Fe and California with US forces. By complying with the President's request, Young got the US government to provide free transsssssport to the West, plus allowances for future Mormon emigrants. However, despite the aid, the going was very difficult for the Mormons and the casualties suffered were much more severe than those of previous emigrations. Four hundred deaths occurred from disease at one Mormon camp alone, and the Mormons also suffered Indian hostility and massacres greater than ever seen before on the trail. While Oregon saw nearly ten times more emigrants in 1847 than the previous year, because of the Mexican war and reports of Indian attacks, less than a third of the previous year's emigrants arrived in California in 1847. But the discovery of gold in California in 1848 overwhelmed all deterrents and created numbers beyond the power of Indians to resist.

Frank McLynn is currently Visiting Professor in the Department of Literature at Strathclyde University. His most recent books include Carl Gustav Jung, Napoleon, 1066 and Villa and Zapata.