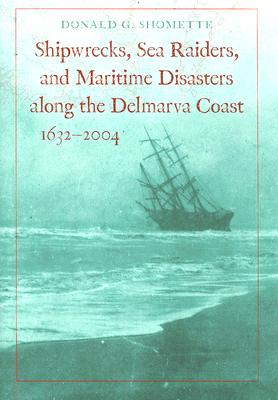 By Donald G. Shomette
$67.00
Unavailable, Out of Stock, or Out of Print

Nor'easters, blizzards, and hurricanes. Spanish galleons, German U-boats, and presidential yachts. Pirates and privateers. The ephemeral and deadly nature of islands, dunes, inlets, and shoals. The history of the Delmarva Peninsula's Atlantic coast is rich with tales of fantasy and adventure, heroism and tragedy, greed and charity. Claiming more than 2,300 vessels since 1632, it rivals North Carolina's Outer Banks for the infamous title The Graveyard of the Atlantic.

Maritime historian Donald G. Shomette brings these stories to life. Featuring the accounts of twenty-five ill-starred vessels--some notorious and some forgotten until now--this anthology provides a fascinating history of a local maritime culture and charts how the catastrophic events along this shore significantly affected U.S. merchant shipping as a whole. Shomette weaves together history, folklore, and legend in accounts of the tragic loss of the 1750 Spanish treasure fleet, the British blockade of the Delaware in the American Revolution, the depredations of Confederate commerce raiders during the Civil War, the Billy Mitchell affair, the Hurricane of 1933, and the Nazi U-boat offensive of World War II. His appendix provides a complete catalog of all 2,300 recorded wrecks, including coordinates and location descriptions where available.

A vivid montage of seafaring adventures and pivotal events in American history, this volume makes an essential contribution to the library of the history buff, wreck diver, and local adventurer.