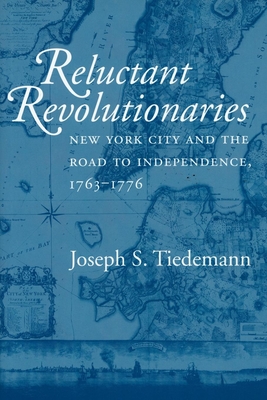 By Joseph S. Tiedemann
This Book Is Not Sold Online - Inquire In Store
Usually Ships in 1-5 Days

The question of why New Yorkers were such reluctant revolutionaries has long bedeviled historians. In an innovative study of New York City between 1763 and 1776, Joseph S. Tiedemann explains how conscientiously residents labored to build a consensus under difficult circumstances. New Yorkers acted the way they did not because they were mostly loyalist or because a few patrician conservatives were able to stem the tide of revolution but because the population of their city was so heterogeneous that consensus was not easily achieved.Differences within the city's pluralistic population slowed the process of hammering out a course of action acceptable to the large majority. The consensus that finally emerged had to be cautious rather than militant in order to unite as many people as possible behind the revolutionary banner. Ultimately, the time it took was far less significant, Tiedemann notes, than the fact that New York proceeded to declare independence, and went on to become a pivotal state in the new nation. In framing his argument, Tiedemann explains the limitations of interpretations offered by both progressive, New Left, and consensus historians. Citing the work of scholars as diverse as Walter Laqueur, Theda Skocpol, and Louis Kreisberg, Tiedemann pays close attention to the dynamics of British colonial rule and its impact on New York.