Writing Prejudices: The Psychoanalysis and Pedagogy of Discrimination from Shakespeare to Toni Morrison (Paperback) 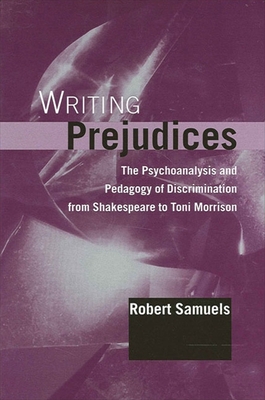 By Robert Samuels
$32.95
Unavailable, Out of Stock, or Out of Print

Writing Prejudices addresses critical attempts to undermine prejudice through education in general, and literary studies in particular. Robert Samuels argues that these attempts often fail because they do not take into account the different forms of prejudice, the role played by homophobia in racism and sexism, the structure of what Lacan calls symbolic castration, and the unconscious foundations of cultural formations. Addressing these deficiencies, Samuels uses psychoanalytic theory to examine the manifestations of racism, sexism, ethnocentrism, and homophobia in the works of Shakespeare, Mary Shelley, Joseph Conrad, and Toni Morrison, showing how these distinct modes of oppression feed off of each other and the diverse ways that cultural critics can work to undermine them.

Robert Samuels is Lecturer in the Writing Program at the University of California at Santa Barbara and the author of Hitchcock's Bi-Textuality: Lacan, Feminisms, and Queer Theory, also published by SUNY Press.