New York From the Air (Hardcover) 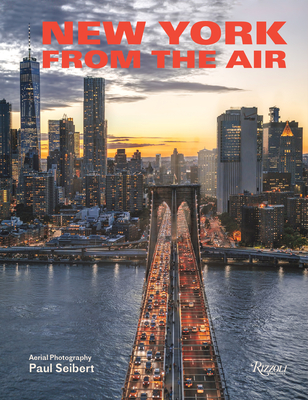 Have you ever flown into New York City and marveled out the plane windows at the incredible view of the skyline from the air? With unprecedented access from both helicopter and rooftop vantages, here are 200 of the most stunning, never-before-seen New York City photographs ever assembled.

From sunrise to sunset, New York City is the most photographed city in the world. No other city is captured more each year, anywhere. Award-winning photographer Paul Seibert takes us on a breath-taking journey high above New York, from sweeping panoramic views to details of the architecture that make the city a photographer’s dream. Seibert’s years as the official photographer for FlyNYON helicopter tours allowed him to know where and when to be for the most extraordinary light. Seibert brings his unique and unmatched aerial vistas of New York City to life—every angle, every moment, every season. Tourists and native New Yorkers alike will see New York for the first time, all over again.

Paul Seibert lives in Closter, New Jersey, and has been a lifelong resident of the New York metropolitan area. He worked as the official photographer-director of digital content at FlyNYON, the premier helicopter and aerial tour provided over New York City. He was the winner of the 2019 Empire State Building Photo Contest, a nationwide contest with thousands of entries per year. Seibert has been a contributor to Rizzoli books New York City on Instagram and The Statue of Liberty: The Monumental Dream.

“TOP OF THE CITY… The crown of New York’s Chrysler building soars in the foreground while, far below, a shaft of light picks out a single, glowing yellow taxi. ‘My hope is that you can feel my love for this city through my images,’ writes photographer Paul Seibert in the introduction to his new book New York From The Air. His photos, taken from helicopters and perches on buildings, can reveal surprises. Brooklyn’s Grand Army Plaza, on the ground a noisy maze of crosswalks and off-ramps, from the air assumes a serene oval, snow-covered beauty. Seen from above, the foreshortened Statue of Liberty has a deep seam running down the middle of her head. At different seasons, vivid autumn colors seem painted on Central Park’s trees, thunderclouds loom apocalyptically over the city’s bay and One World Trade Center takes a lightning strike. New York sends light back into the skies as well: A picture of the Tribute in Light, an annual 9/11 memorial, shows twin columns of light merging, then blazing at the top like a candle.” —THE WALL STREET JOURNAL