An Air War with Cuba: The United States Radio Campaign Against Castro (Paperback) 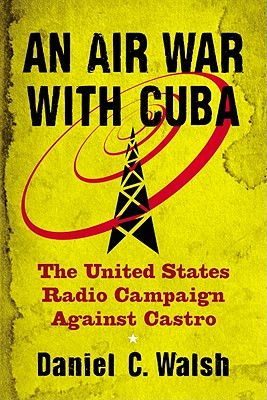 By Daniel C. Walsh
This Book Is Not Sold Online - Inquire In Store

Since 1985, Radio Marti, a Radio Free Europe-type station, has broadcast American news and propaganda in Cuba. Its sister station, TV Marti, debuted in 1990. Respected operations at the start, Radio and TV Marti fell under the influence of the Cuban American National Foundation--a group of hard-line Cuban exiles--who intensified the anti-Castro rhetoric the stations sent to the island and promoted its leaders as the heirs to a post-Castro Cuba. Though the initial goal of the two stations was to increase pro-American sentiment among the island nation's citizens, the stations have succeeded only in driving the two nations further apart. This history of American propaganda broadcasting in Cuba describes how Castro used radio to obtain power; explores the impact of Radio and TV Marti on U.S.-Cuba relations, including the phenomenon of Cuban rafters; and chronicles the domestic political struggles to keep the stations on the air.

Daniel C. Walsh holds a Ph.D. in mass communications from the University of South Carolina and is building an archive of international radio broadcasts. He is an assistant professor at Appalachian State University in the Department of Communication.