The 1940 Under the Volcano: A Critical Edition (Canadian Literature Collection) (Paperback) 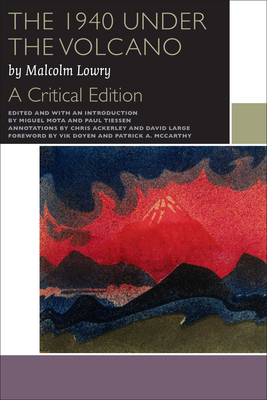 The 1940 Under the Volcano--hidden for too long in the shadows of Lowry's 1947 masterpiece--differs from the latter in significant ways. It is a bridge between Lowry's 1930s fiction (especially In Ballast to the White Sea) and the 1947 Under the Volcano itself. Joining the recently published Swinging the Maelstrom and In Ballast to the White Sea, The 1940 Under the Volcano takes its rightful place as part of Lowry's exciting 1930s/early-40s trilogy. Scholars have only recently begun to pay systematic attention to convergences and divergences between this earlier work and the 1947 version. Miguel Mota and Paul Tiessen's insightful introduction, together with extensive annotations by Chris Ackerley and David Large, reveal the depth and breadth of Lowry's complex vision for his work. This critical edition fleshes out our sense of the enormous achievement by this twentieth-century modernist.
Ce livre est publi en anglais.

Malcolm Lowry was born in 1909 in northwest England, near Liverpool. During the 1930s he lived in London, New York, Mexico, and Los Angeles before moving to British Columbia in 1939. This move marked the start of a startlingly fertile period in Lowry's career as a 20th-century literary modernist. The 1940 Under the Volcano formed the basis for his masterpiece, Under the Volcano (1947)--one of the last great modernist novels. Miguel Mota is Associate Professor of English at the University of British Columbia. He has published on numerous 20th-century and contemporary writers and filmmakers. Paul Tiessen is Professor Emeritus at Wilfrid Laurier University. He is the founding editor of the Malcolm Lowry Newsletter (1977-1984) and The Malcolm Lowry Review (1984-2002). Chris Ackerley is Professor of English at the University of Otago, New Zealand. His research focus is modernism, and his speciality is annotation. David Large is a research and teaching assistant at the University of Otago in New Zealand. With Chris Ackerley, he edits an annotation website dedicated to Under the Volcano. Vik Doyen is Professor Emeritus and former vice-dean of the Arts Faculty and head of the English Department at the Katholieke Universiteit Leuven, Belgium. He did archival research in the Malcolm Lowry Collection at the University of British Columbia for his doctoral dissertation. Patrick A. McCarthy is Professor of English at the University of Miami. He has authored several studies on Lowry, including Forests of Symbols: World, Text, and Self in Malcolm Lowry's Fiction.