A Bounded Land: Reflections on Settler Colonialism in Canada (Paperback) 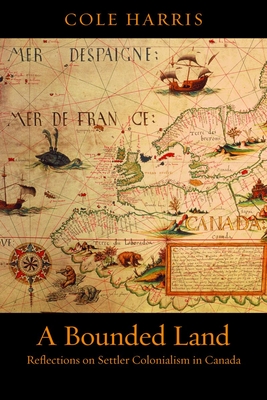 A close look at how society was reorganized, for Indigenous and non-Indigenous people alike, when Europeans resettled in Canada.

Canada is a country of bounded spaces—a nation situated between rock and cold to the north and a political border to the south. In A Bounded Land, Cole Harris seeks answers to a sweeping question: How was society reorganized, for Indigenous and non-Indigenous people alike, when Europeans resettled this distinctive land?

Through a series of vignettes that focus on people’s experiences on the ground, Harris exposes the underlying architecture of settler colonialism as it grew and evolved, from the first glimpses of new lands and peoples to the immigrant experience in early Canada to the dispossession and resettlement of First Nations in British Columbia. In the process, he explores how Canada’s settler societies differed from their European progenitors and, more theoretically, how colonialism managed to dispossess.

At a time when Canada is seeking to overcome the legacies of colonialism, A Bounded Land is essential reading. By considering the whole territory that became Canada over 500 years and focusing on sites of colonial domination rather than on settler texts, Harris unearths fresh insights on the continuing and growing influence of Indigenous Peoples in Canada and argues that country’s boundedness is ultimately drawing it towards its Indigenous roots.

Cole Harris is the editor of the first volume of the Historical Atlas of Canada and the author of Making Native Space: Colonialism, Resistance, and Reserves in British Columbia and The Reluctant Land: Society, Space, and Environment in Canada before Confederation, among other books. He is also a fellow of the Royal Society of Canada and an officer of the Order of Canada. He is a professor emeritus of historical geography at the University of British Columbia.