At the Centre of Government: The Prime Minister and the Limits on Political Power (Paperback) 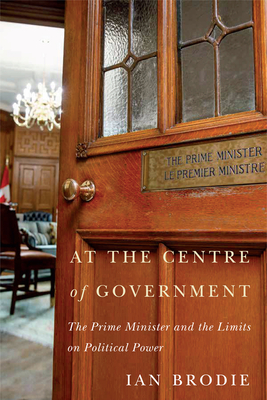 "Canada's prime minister is a dictator." "The Sun King of Canadian government." "More powerful than any other chief executive of any other democratic country." These kinds of claims are frequently made about Canada's leader – especially when the prime minister's party holds a majority government in Parliament. But is there any truth to these arguments? At the Centre of Government not only presents a comprehensively researched work on the structure of political power in Canada but also offers a first-hand view of the inner workings of the Canadian federal government. Ian Brodie – former chief of staff to Prime Minister Stephen Harper and former executive director of the Conservative Party of Canada – argues that the various workings of the Prime Minister's Office, the Privy Council Office, the cabinet, parliamentary committees, and the role of backbench members of Parliament undermine propositions that the prime minister has evolved into the role of an autocrat, with unchecked control over the levers of political power. He corrects the dominant thinking that Canadian prime ministers hold power without limits over their party, caucus, cabinet, Parliament, the public service, and the policy agenda. Citing examples from his time in government and from Canadian political history he argues that in Canada's evolving political system, with its roots in the pre-Confederation era, there are effective checks on executive power, and that the golden age of Parliament and the backbencher is likely now. Drawing on a vast body of work on governance and the role of the executive branch of government, At the Centre of Government is a fact-based primer on the workings of Canadian government and sobering second thoughts about many proposals for reform.

Ian Brodie is associate professor of political science at the University of Calgary.

"Using valuable personal experience as a touchstone, Ian Brodie's At the Centre of Government inspires readers to think more deeply and clearly about democracy and its relationship to liberalism, constitutionalism, and good public policy." Thomas Bateman,

"Brodie brightens his argument with illustrative anecdotes from his own time in government. These are gold, because the Harper years were lean years for insider anecdotes, and because Brodie takes real pleasure in telling his stories." Literary Review of

"At the Centre of Government blends academic scholarship and real-world knowledge to interpret the complex operations of democratic government in action. Readers interested in the early years of Conservative governance will gain fresh insights into the political thinking behind some of the Harper PMO's decisions." The Hill Times

"Using valuable personal experience as a touchstone, Ian Brodie's At the Centre of Government inspires readers to think more deeply and clearly about democracy and its relationship to liberalism, constitutionalism, and good public policy." Thomas Bateman, St. Thomas University