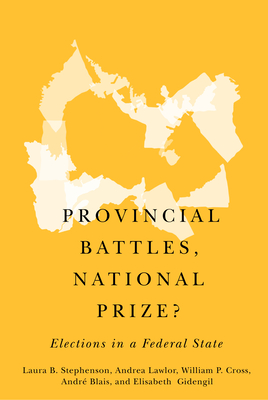 In parliamentary systems like Canada, voters directly contribute to the election outcome only in their own riding. However, the focus of election campaigns is often national, emphasizing the leader rather than the local candidate, and national rather than regional polls. This suggests that elections are national contests, but election outcomes clearly demonstrate that support for parties varies strongly by province. Focusing on the 2015 Canadian election campaigns in British Columbia, Ontario, and Quebec, three large provinces with different subnational party systems, Provincial Battles, National Prize? evaluates whether we should understand elections in Canada as national wars or individual provincial clashes. The authors draw upon voter and candidate surveys, party campaign behaviour, and media coverage of the election to document how political parties vary their messages and strategies across provinces, how the media communicate and frame those messages, and how voters ultimately respond. The study shows that provincial variations in party support reflect differences in voters' political preferences rather than differences in party messages or media coverage. A novel and comprehensive study, Provincial Battles, National Prize? is the first and only thorough treatment of the party, media, and voter aspects of a federal election campaign through a subnational lens.

"What political parties should say to whom and how to say it is a constant puzzle. Often, what works with one cohort of voters does not work with others, and in the heat of a campaign impressions about pivotal events may be exaggerated. A challenge for studying elections is finding lessons that are enduring. In some ways, researchers ought to approach elections data as though they are analyzing weather, earthquakes or stock markets: the greatest value is when the objective is to identify patterns that can help us understand the next event. Otherwise, an election study is akin to analyzing a sporting event long after the results are known. In this regard, the authors try to extrapolate lasting observations instead of documenting the finer details of the 2015 Canadian general election. The well-edited, crisp writing combined with theory testing goes some way to achieving that objective." The Hill Times