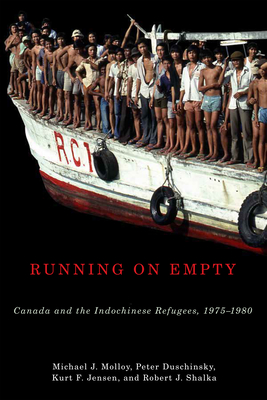 The fall of Saigon in April 1975 resulted in the largest and most ambitious refugee resettlement effort in Canada’s history. Running on Empty presents the challenges and successes of this bold refugee resettlement program. It traces the actions of a few dozen men and women who travelled to seventy remote refugee camps, worked long days in humid conditions, subsisted on dried noodles and green tea, and sometimes slept on their worktables while rats scurried around them – all in order to resettle thousands of people displaced by war and oppression. After initially accepting 7,000 refugees from camps in Guam, Hong Kong, and military bases in the US in 1975, Canada passed the 1976 Immigration Act to establish new refugee procedures and introduce private refugee sponsorship. In July of 1979, the federal government under Prime Minister Joe Clark announced that Canada would accept an unprecedented 50,000 refugees – later increased to 60,000 – more than half of whom would be sponsored by ordinary Canadians. Running on Empty presents gripping first-hand accounts of the government officials tasked with selecting refugees from eight different countries, receiving and matching them with sponsors, and helping churches, civic organizations, and groups of neighbours to receive and integrate the newcomers in cities, towns, and rural communities across Canada. Timely and inspiring, Running on Empty offers essential lessons for governments, organizations, and individuals trying to come to grips with refugee crises in the twenty-first century.

"Molloy et al., document in detail the performance of Canadian government officials responsible for developing the policy framework as well as the administrative tools for locating Indochinese refugees ... [this] book is captivating, surprising for a volume on the workings of a bureaucracy. It is the best and most accurate record of what took place and will serve as a critical historical source book." Howard Adelman, Literary Review of Canada

“This insider’s account of an historic movement of refugees makes for an engaging read. The real gems are the accounts from officials on the ground.” Stephanie Bangarth, King’s College at University of Western Ontario

“Running on Empty is a compelling narrative about how Canada was able to resettle Vietnamese, Laotian, Cambodian, and Hmong refugees during a time of international crisis. A valuable addition to Canadian immigration history.” Vinh Nguyen, Renison University College at University of Waterloo