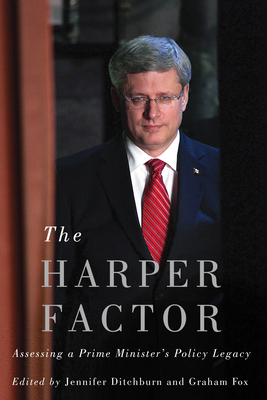 By Jennifer Ditchburn, Graham Fox
$34.95
Unavailable, Out of Stock, or Out of Print

Political legacy is a concept that is often tossed around casually, hastily defined by commentators long before a prime minister leaves office. In the case of the polarizing Stephen Harper, clear-eyed analysis of his tenure is hard to come by. The Harper Factor offers a refreshingly balanced look at the Conservative decade under his leadership. What impact did Harper have on the nation’s finances, on law and order, and on immigration? Did he accomplish what he promised to do in areas such as energy and intergovernmental affairs? How did he change the conduct of politics, the workings of the media, and Parliament? A diverse group of contributors, including veteran economists David Dodge and Richard Dion, immigration advocate Senator Ratna Omidvar, Stephen Harper’s former policy director Paul Wilson, award-winning journalists such as Susan Delacourt, and vice-provost of Aboriginal Initiatives at Lakehead University Cynthia Wesley-Esquimaux, make reasoned cases for how Harper succeeded and how he fell short in different policy domains between 2006 and 2015. Stephen Harper’s record is decidedly more nuanced than both his admirers and detractors will concede. The Harper Factor provides an authoritative reference for Canadians on the twenty-second prime minister’s imprint on public policy while in office, and his political legacy for generations to come.

Jennifer Ditchburn is the editor-in-chief at Policy Options magazine. Graham Fox is president and chief executive officer for the Institute for Research on Public Policy.

“A useful tool for academics, students, and general consumers of Canadian politics, history, media studies, public policy, and economics, The Harper Factor assembles a capable group of writers to conduct a thorough examination of policy pursuits and the outcomes of those endeavours.” Timothy Powers, vice-chairman of Summa Strategies