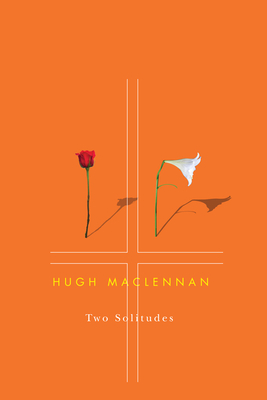 By Hugh MacLennan
$19.95
Unavailable, Out of Stock, or Out of Print

Winner of the Governor General’s Award for Fiction Canada Reads Selection (CBC), 2013 A landmark of nationalist fiction, Hugh MacLennan’s Two Solitudes is the story of two peoples within one nation, each with its own legend and ideas of what a nation should be. In his vivid portrayals of human drama in First World War–era Quebec, MacLennan focuses on two individuals whose love increases the prejudices that surround them until they discover that “love consists in this, that two solitudes protect, and touch and greet each other.” The novel centres around Paul Tallard and his struggles in reconciling the differences between the English identity of his love Heather Methuen and her family, and the French identity of his father. Against this backdrop the country is forming, the chasm between French and English communities growing deeper. Published in 1945, the novel popularized the use of “two solitudes” as referring to a perceived lack of communication between English- and French-speaking Canadians. Content note: This book contains racial slurs that readers may find offensive or upsetting.

“Here is the substance of Canada, her countryside, her cities, her conflicting cultures, and, above all, her people.” The Canadian Forum

“Two Solitudes, Hugh MacLennan’s 1945 masterpiece, sets out to do nothing less than explain Quebec to the rest of Canada and harmonize the dominion of future citizens.” Toronto Review of Books

“Two Solitudes is MacLennan’s best-known novel, one of those rare books whose title alone shaped how this country speaks and thinks.” The Walrus