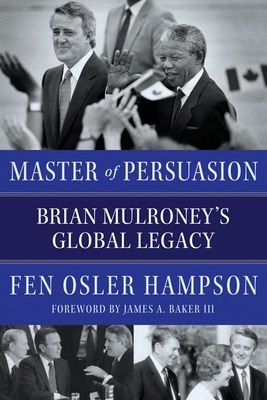 By Fen Osler Hampson, James A. Baker, III (Foreword by)
$35.00
Unavailable, Out of Stock, or Out of Print

Based on unprecedented access--interviews with key players, diaries, memos, etc.--the first book to document Brian Mulroney's impressive foreign policy record, from NAFTA to the collapse of the Soviet Union, climate change to the release of Nelson Mandela.

Prime Minister Brian Mulroney led and lifted Canada's voice and influence in world affairs to unprecedented heights. He understood better than many of his predecessors that Canada's power and influence derived from a solid grasp of our vital national interests, and a purposeful commitment to pursing those interests and values on the world stage. With full access to key players and new documentation, Fen Osler Hampson brilliantly tells how Canada succeeded in advancing its national interests on trade, the environment, national security, and the elevation of democracy and human rights under Mulroney's leadership.

Through negotiation and the deliberate cultivation of close personal links with other world leaders and figures, including Ronald Reagan and George H.W. Bush, Margaret Thatcher, François Mitterrand, Nelson Mandela and many others, there were significant achievements that serve Canadian interests to this day. Efforts to combat acid rain, repair the ozone layers, and to champion climate change, long before it became fashionable, surprised and satisfied many ardent advocates on the environment.

Perhaps most important of all, Brian Mulroney put to bed the long-standing myth that Canada could not be a respected international player if it was seen as being too close to the United States. In sharp contrast to his predecessor, he argued that the path for global influence for the country began with a principled and trusted dialogue with Washington, one that other world leaders noticed.

As Canada's present government navigates its own course in choppy international waters, there is much to be learned from our finest hour on the international stage some three decades ago under Prime Minister Brian Mulroney.

FEN OSLER HAMPSON is Chancellor's Professor at Carleton University and Distinguished Fellow and Director of the Global Security and Politics Program at the Centre for International Governance Innovation. He is the author/co-author of twelve books on Canadian foreign policy and international affairs and co-editor of twenty-eight volumes. He holds a Ph.D. from Harvard University and is also a graduate of the London School of Economics and Political Science and the University of Toronto.

Praise for Master of Persuasion:

“Master of Persuasion tells a compelling story about Brian Mulroney’s important policies on the wide range of issues that were at the center of the Canadian debate during his time in office, including the vital role that Canada under his leadership played in advancing human rights and ending apartheid in South Africa.” —Paul Martin, former Prime Minister of Canada

“It [is] a tonic to read an analysis from a serious scholar and practitioner that connects the dots on the Mulroney approach to Canada’s global role, and the need to engage internationally in Canada’s domestic and global interests. [Master of Persuasion] is simply a superb, thematically coherent, and informative overview.” —Hugh Segal, Head of Massey College

"I recall a few raised eyebrows when Brian Mulroney was named Canada's Greenest prime minister. Fen Hampson's meticulously researched review of Mulroney's contribution to our planet amply confirms that title.  I keep waiting for a Canadian prime minister to seriously challenge his record, as I imagine Mr. Mulroney does as well.” —Elizabeth May, leader of the Green Party of Canada

“A compelling behind the scenes examination of the extraordinary statecraft of a leader who time and again displayed that hardest of diplomatic skills—promotion of hard national interests while at the same time galvanizing historic campaigns to advance global compassion and democratic values.
As revealed  by international affairs historian Fen Osler Hampson, Brian Mulroney combined rare political insight with an often rollicking power of persuasion to advance objectives across a broad front.” —Brian Stewart, former foreign affairs correspondent and senior fellow of the Munk School of     Global Affairs