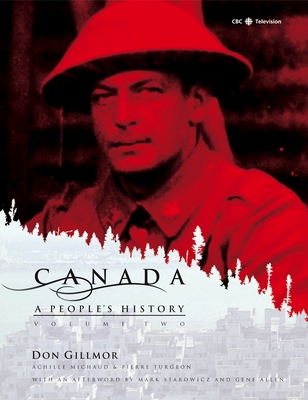 The top non-fiction bestseller of fall 2000 was the authoritative and beautiful Canada: A People’s History, Volume One. For fall 2001, M&S is proud to present the equally stunning and comprehensive second volume of this landmark work.

This fall, on consecutive Sunday evenings starting on September 30, the CBC will broadcast eight new episodes from its spectacular – and spectacularly successful – series Canada: A People’s History.

Volume Two opens with the rebellion over property and language rights for the French-speaking Métis in Manitoba, led by the charismatic and troubled Louis Riel – a key event in our history and one that haunts us to this day. It closes with the less bloody but no less traumatic confrontation between the Mohawk and the army at Oka, Quebec, in 1990.

Between these two harrowing events lie more than a hundred years of astonishing change and development in Canada. In those years Canadians have fought in two world wars, struggled through long, savage Depression years, adjusted to the post-war world, and peaceably accommodated themselves to wave after wave of immigrants arriving from around the globe. The political changes have been no less striking, with the eruption of nationalism in Quebec, women’s long fight for equal rights, and the creation of Canadians’ most cherished social service: universal health care.

Even more than was possible in Volume One, this well-researched book tells the major events of the twentieth century as a story of people: the famous and occasionally flamboyant politicians and public figures are here, but the book’s strength lies in the stories of ordinary people in extraordinary circumstances.

An award-winning journalist and writer, Don Gillmor is the author of the highly acclaimed 1999 story of his family’s roots, The Desire of Every Living Thing.

Achille Michaud, co-author of Richard Hatfield: Power and Disobedience, is a producer with Radio-Canada in Montreal.