The First Confessor: The Legend of Magda Searus (Hardcover) 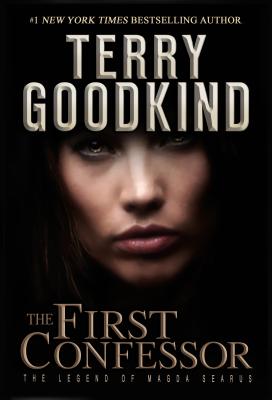 From #1 New York Times bestselling author Terry Goodkind comes The First Confessor, the prequel to the Sword of Truth

In a time before legends had yet been born...

Married to the powerful leader of her people, safe among those gifted with great ability, Magda Searus is protected from a distant world descending into war. But when her husband, a man who loved life and loved her, unexpectedly commits suicide, she suddenly finds herself alone. Because she is ungifted herself, without her husband she no longer has standing among her people, and she finds herself isolated in a society that seems to be crumbling around her.

Despite her grief, she is driven to find the reasons behind why her husband would do such a thing--why he would abandon her and her people at such a profoundly dangerous time. Though she is not gifted, she begins to discover that there may be more to her husband's suicide than anyone knew. What she finds next, no one is willing to believe.

Without anyone to help her, she knows that she must embark on a mission to find a mysterious spiritist, if she even exists, so that she may speak with the dead. This quest may also be her last chance to unravel what is really behind the mysterious events befalling her people. What she discovers along the way is that the war is going far worse than she had known, and that the consequences of defeat will be more terrifying for her and her people than she could have imagined.

As mortal peril begin to close in around her, Magda learns that she is somehow the key to her people's salvation.

Journey with Magda Searus into her dark world, and learn how true legends are born.

Terry Goodkind (1948-2020) is a #1 New York Times bestselling author. His books include the multi-volume epic fantasy Sword of Truth series -- beginning with Wizard’s First Rule, the basis for the television show Legend of the Seeker -- and related series Richard and Kahlan and The Nicci Chronicles.

Goodkind was born and raised in Omaha, Nebraska, where he also attended art school. Alongside a career in wildlife art, he was also a cabinetmaker and a violin maker, and did restoration work on rare and exotic artifacts from around the world. In the 1990s he relocated to Nevada, where, when not writing novels, he was a racing-car enthusiast.