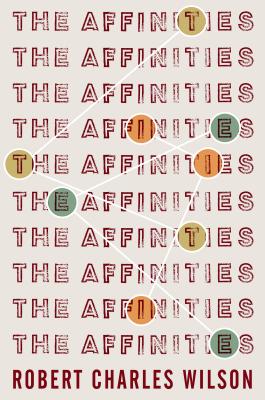 By Robert Charles Wilson, Teresa Nielsen Hayden (Editor)
This Book Is Not Sold Online - Inquire In Store
Out of Print

In our rapidly-changing world of "social media", everyday people are more and more able to sort themselves into social groups based on finer and finer criteria. In the near future of Robert Charles Wilson's The Affinities, this process is supercharged by new analytic technologies--genetic, brain-mapping, behavioral. To join one of the twenty-two Affinities is to change one's life. It's like family, and more than family. Your fellow members aren't just like you, and they aren't just people who are likely to like you. They're also the people with whom you can best cooperate in all areas of life--creative, interpersonal, even financial.

At loose ends both professional and personal, young Adam Fisk takes the suite of tests to see if he qualifies for any of the Affinities, and finds that he's a match for one of the largest, the one called Tau. It's utopian—at first. Problems in all areas of his life begin to simply sort themselves out, as he becomes part of a global network of people dedicated to helping one another—to helping him.

But as the differing Affinities put their new powers to the test, they begin to rapidly chip away at the power of governments, of global corporations, of all the institutions of the old world. Then, with dreadful inevitability, the different Affinities begin to go to war--with one another.

What happens next will change Adam, and his world, forever.

Robert Charles Wilson was born in California and lives in Toronto. His novel Spin won science fiction’s Hugo Award in 2006. Earlier, he won the Philip K. Dick Award for his debut novel A Hidden Place; Canada’s Aurora Award for Darwinia; and the John W. Campbell Award for The Chronoliths.

"Wilson’s trademark well-developed characters and understated but compelling prose are very much in evidence in this quietly believable tale of the near future."—Publishers Weekly

"An intriguing and seriously innovative attempt to grapple with some of the issues raised by the 21st century's obsession with social media."—Kirkus Reviews