Lights of Mankind: The Earth at Night as Seen from Space (Hardcover) 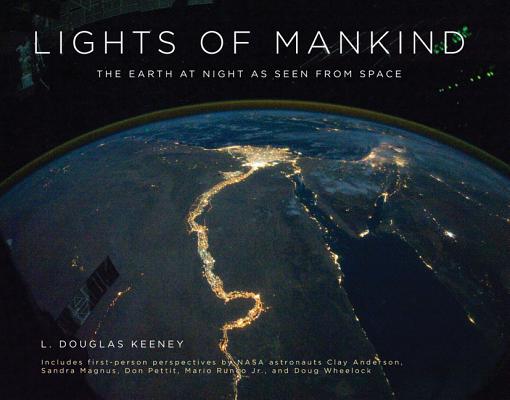 By L. Douglas Keeney
$32.50
Unavailable, Out of Stock, or Out of Print

Earth at night, as the photos and essays of this book showcases, is an electric planet, glittering with billions of lights for all the solar system to see.

L. Douglas Keeney is the author or editor of many historical books, including "15 Minutes: Curtis LeMay and the Countdown to Nuclear Annihilation." He was the cofounder of the Military Channel, and has appeared on the Discovery Channel, CBS, and the Learning Channel. A pilot, a scuba diver, and an avid traveler, he has visited many of the cities in this book. Video: Time-Lapse Footage of the Earth at Night from the International Space Station

“Earthbound folks rarely get the chance to see how the planet's city lights glow from space. Several years ago, however, author L. Douglas Keeney noticed pictures being tweeted by astronauts on the International Space Station. The clear images of Earth's city lights were made possible by new camera technology that was able to shoot high-resolution photos even as the station moved at a rapid 17,500 miles an hour some 240 miles above Earth's surface. Keeney then got to work, pouring through more than 300,000 unmarked NASA photo, choosing 400 of the best images for his book the Lights of Mankind: The Earth at Night as Seen from Space.” —BusinessInsider.com

“A new book collects images that offer a different look at the Earth from space, when sunlight is replaced by the lights of human civilization. Lights of Mankind provides a sampling of some of the best such nighttime imagery from six continents. Many cities are visible in sharp detail, revealing their network of roads and patterns of development, from grids to hubs-and spokes to more irregular patterns, that are much harder to see during the day. Keeney matches the images with brief captions describing the images and including in many cases capsule histories of those cities. Included in the book are several essays from astronauts who have flown on the ISS, providing their views of what it was like to view, and photograph, the Earth at night.” —Space Review

“Imagining what Earth must look like from orbit leaves me almost breathless. And I had that feeling after looking through the amazing images in Lights of Mankind: The Earth at Night as Seen from Space.” —Kim D. Kolarik, The Courier-Journal (Louisville)

The books’s Earth-at-night photography as reviewed by the media:

"Earthlings are seeing their planet in a whole new light, thanks to NASA and its astronauts aboard the Internet-wired space station. They're beaming down dazzling images and guess-this-mystery-location photos via Twitter and have even launched a game. Landlubbers the world over are eating it up. From schoolchildren to grown-up business entrepreneurs and artists, the public is captivated and can't seem to get enough."  —Huffington Post

“Photos and thoughts beamed down from the International Space Station via Twitter are raising goose bumps across the planet.” —Daily Telegram

"For decades people have found themselves transixed by photos of Earth from space, enjoying a switch in perspective that stimulates the mind and awakens a sense of mystery."  —The Telegram