1,000 Unforgettable Senior Moments: Of Which We Could Remember Only 254 (Hardcover) 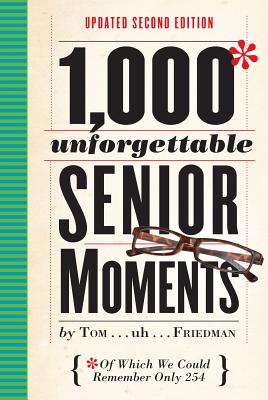 By Tom Friedman
$9.95
Unavailable, Out of Stock, or Out of Print

The president who left the nuclear launch codes in a suit at the dry cleaners. The novelist who put the orange juice outside and the kitten in the refrigerator. The Russian general who left home in full military dress . . . minus his pants. The famous sex goddess who blew the same line through 52 takes. And the rock star who no longer remembers 1975. Filled with classic lapses, gaffes, and mental bloopers, 1,000 Unforgettable Senior Moments is a fabulous and witty gift for anyone of a certain age. And now it is updated, revised with more than 20 percent new stories, and repackaged in two color, making it an even more vibrant, visually appealing, fresh, and compellingly readable book.

Anyone who’s ever had a mental lapse will empathize with relative spring chicken Nicki Minaj, who, while accepting a BET Viewers’ Choice Award, forgot why she was receiving the statuette (on live national television, no less). Or the team of astrophysicists who believed they had discovered proof of alien life—only to discover the signals were coming from the lunchroom microwave. Here’s a best man forgetting to show up at the wedding, a musician leaving his priceless cello in a cab, the bank robber who wrote a holdup note on a paycheck stub that had his name and address printed on it, and the Fox studio chief who, when pressed by his leading lady to remember her name, offered “. . . Cleopatra?”

Tom Friedman is a writer, editor, and executive producer who worked for public television's preeminent producing station, WGBH Boston, for nearly 25 years. In 1996, he won a Peabody Award for the science documentary series Odyssey of Life. He is also the author of two books about business: Life and Death on the Corporate Battlefield, with Paul Solman, and Up the Ladder.