MARVEL Spider-Man: A History and Celebration of the Web-Slinger, Decade by Decade (Hardcover) 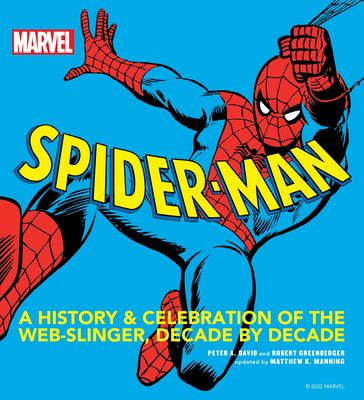 In this complete biography of one of Marvel’s most beloved super heroes, explore Spider-Man’s development through behind-the-scenes anecdotes, images, and rarely-seen interviews.

From the comic page to the big screen and beyond, Spider-Man has thrilled fans for generations. Since swinging onto the scene in 1961, in the pages of Amazing Fantasy #15 by Stan Lee and Steve Ditko, the world’s most famous wall-crawler has captivated the world, starring in millions of comics, over twenty different films and animated series, numerous blockbuster video games, and one Broadway show, as well as appearances in countless other mediums.

In celebration of his illustrious and expansive history, MARVEL Spider-Man: A History and Celebration of the Web-Slinger, Decade by Decade is a comprehensive collection of exciting art and expert commentary that brings Spidey’s backstory out of the archive and into the arms of fans worldwide. Organized by decade, you will:

Illustrated with images from the comics, movies, and other MARVEL Spider-Man–related items, this collection is a must-have for any fan of the web-slinger.

Matthew K. Manning is the author of over fifty books and dozens of comic books, ranging from history books about Batman or Wolverine to comics starring Wonder Woman or Spider-Man. His recent Batman/Teenage Mutant Ninja Turtles Adventures comic book series was nominated for Comic of the Year by the Diamond Gem Awards. He lives in Asheville, North Carolina. Visit him online at matthewkmanning.com.

Robert Greenberger has long worked in the pop-culture field, including tenures at Starlog Press, DC Comics, Marvel Comics, and Weekly World News. His works include The Essential Batman Encyclopedia, Spider-Man Vault (co-written with Peter David), and Stan Lee's How to Write Comics (co-written with Stan Lee). He has over a dozen Star Trek books to his credit, in addition to editing the comic book adaptations for eight years. For more information, see his website, bobgreenberger.com.

Peter A. David is a prolific author whose career, and continued popularity, spans nearly two decades. He has worked in every conceivable media: Television, film, books (fiction, non-fiction and audio), short stories, and comic books, and acquired followings in all of them. Peter authored the original printing of The Spider-Man Vault. Peter is best known for his work in comic books and Star Trek novels. While at Marvel in the 1980s, he wrote the acclaimed story “The Death of Jean DeWolff” for The Spectacular Spider-Man, followed by a lengthy run writing The Incredible Hulk. Since then, “PAD” has published dozens of novels; had several titles hit the New York Times bestseller list; and written and co-produced for TV and film.

"...a comprehensive collection of exciting art and expert commentary that brings Spidey’s backstory out of the archive and into the arms of fans worldwide."—Fantastic Universes

"For those that remember the hard to handle Vault (due to size and packaging concerns), having the book portion of the Vault available in a new updated edition after a ten year hiatus is a win for current fans and those that may have missed out on the initial examination of Spider-Man (or those who prefer a standard, easy to read book)."—Conskipper

"This is perhaps the best-friendly neighborhood book on Spidey ever published. You have everything you need to know about your favorite web-slinger"—Sandbox World

"This isn’t simply a history text, but more of a coffee table book that has something interesting on almost every single page. Naturally, for a book about super-heroes, the presentation of the book itself has a comic book flair all its own, pleasing the eye as you read through each bit of history and color coding the chapters for easy reference."—Real Otaku Gamer