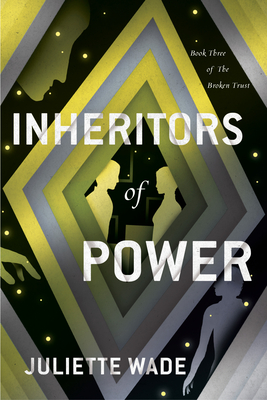 By Juliette Wade
$19.00
Unavailable, Out of Stock, or Out of Print

This is book number 3 in the The Broken Trust series.

The third book of The Broken Trust continues an epic struggle for power, kindled in the hearts of two brothers, as it spreads to crack the foundations of their underground society.

Many years have passed since the Eminence Nekantor and Heir Adon seized power, and life in Pelismara has found a fragile equilibrium under Nekantor’s thumb. Now the Imbati Service Academy suspects that Xinta, Manservant to the Eminence, may have taken control of Nekantor for his own sinister purposes, endangering what peace still remains. Imbati Catín, an Academy prodigy, vows service to Adon, balancing two core purposes — to advance her Master's designs on power, and to determine the full extent of Xinta's influence.

When a trash hauler named Akrabitti Corbinan walks into a place he doesn’t belong, everything falls out of balance. Catín, who is investigating this newly discovered hidden library, immediately arrests Corbinan for trespassing. Nekantor then seizes Corbinan, believing he's a spy who sought to topple the government, and Xinta vanishes him before Catín can determine his intent. What was Corbinan really seeking? What dangerous information does the library contain, that Xinta might seek to control? And what might happen if someone more dangerous finds Corbinan first?

Praise for Inheritors of Power

“I devoured it in half a day. With every book and every chapter, Wade leads us deeper into the maze. Just when you think the tension has reached its peak, she winds it even tighter. I can't wait to see what Varin's fate will be." —Marie Brennan, author of the Memoirs of Lady Trent novels

“This third book in the series delves deeper into an incredible world divided by caste and culture, with stunningly nuanced characters that will break your heart in the best sort of way.” —Beth Cato, author of Breath of Earth

“Inheritors of Power is not only jam-packed with deadly intrigue, unlikely alliances, complex characters, and incredible friendship, but is above all an absolute masterclass in building a massive sandbox of a world that never once slows the story to explain itself. It lays out an incredible breadcrumb trail which is an absolute delight to follow.” —Nicole Kornher-Stace, author of Firebreak

Praise for The Broken Trust series