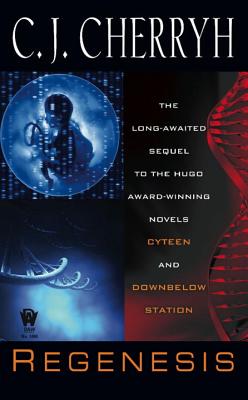 By C. J. Cherryh
This Book Is Not Sold Online - Inquire In Store
Hard to Find

This is book number 2 in the Alliance-Union Universe series.

The long-awaited sequel to the Hugo award-winning novels Cyteen and Downbelow Station.

The direct sequel to Cyteen, Regenesis continues the story of Ariane Emory, Personal Replicate, the genetic clone of one of the greatest scientists humanity has ever produced, and of her search for the murderer of her progenitor-the original Ariane Emory. Murder, politics, deception, and genetic and psychological manipulation combine against a backdrop of interstellar human factions at odds to confront questions that have remained unanswered for two decades...

Who killed the original Ariane Emory?

And can her Personal Replicate avoid the same fate?

"Complex and rich, with beautifully rounded characters, this novel can stand alone, but will delight fans of Cyteen with extra layers of meaning that resonate between old and new." —Publishers Weekly (starred Review)

"In Alliance-Union, there is lots of room between moral absolutes, and in this big book, lots of space for absorbing characters; for adventure, intrigue, and violence; and for plausible extrapolations of current technologies and institutions." —Booklist

“It has been twenty long years since Cyteen was first released and happily, the continuation Regenesis was worth the wait. A fine piece of work that displays Cherryh’s mastery of the storyteller’s art.” —Monsters & Critics