The Chronicles Of Captain Blood (Paperback) 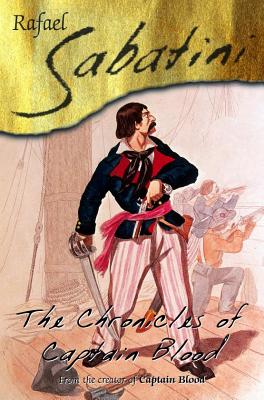 This is book number 2 in the Captain Blood series.

Further adventures from the much-loved Captain Blood, the ‘Robin Hood’ of the Spanish Seas. In his latest exploits, 'The Chronicles of Captain Blood' takes him to new adventures with as much excitement and swashbuckling adventure as ever before. Winning invaluable treasures, rescuing his crew from almost certain death and saving an English settlement are all in a day’s work for this remarkable hero of land and sea.

Rafael Sabatini, creator of some of the world’s best-loved heroes, was born in Italy in 1875 to an English mother and Italian father, both well-known opera singers. He was educated in Portugal and Switzerland, but at seventeen moved to England, where, after a brief stint in the business world, he started to write. Fluent in a total of five languages, he nonetheless chose to write in English, claiming that ‘all the best stories are written in [that language]’. His writing career was launched with a collection of short stories, followed by several novels. Fame, however, came with ‘Scaramouche’, the much-loved story of the French Revolution, which became an international bestseller. ‘Captain Blood’ followed soon after, which resulted in a renewed enthusiasm for his earlier work which were rushed into reprint. For many years a prolific writer, he was forced to abandon writing in the 1940’s through illness and eventually died in 1950. Sabatini is best remembered for his heroic characters and high-spirited novels, many of which have been adapted into classic films, including Scaramouche, Captain Blood and The Sea Hawk. They appeal to both a male and female audience with drama, romance and action, all placed in historical settings. It was once stated in the ‘Daily Telegraph’ that ‘one wonders if there is another storyteller so adroit at filling his pages with intrigue and counter-intrigue, with danger threaded with romance, with a background of lavish colour, of silks and velvets, of swords and jewels.’