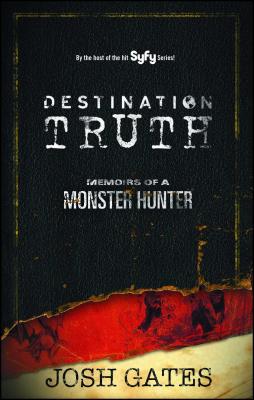 Truth is stranger than legend . . . and your journey into both begins here.

Follow Gates from the inception of the groundbreaking hit show (at the summit of Kilimanjaro) to his hair-raising encounters with dangerous creatures in the most treacherous locations on earth. Among his many adventures, he unearths the flesh-crawling reality of the Mongolian Death Worm, challenges an ancient curse by spending the night in King Tut’s tomb, descends into a centuries-old mine to search for an alien entity in subterranean darkness, pursues ghosts in the radioactive shadow of Chernobyl, and explores sightings of Bigfoot from the leech-infested rain forests of Malaysia to the dizzying heights of the Himalayas.

Part journey into the unexplained, part hilarious travelogue, part fascinating look at the making of a reality-based TV show—and featuring never-before-published photographs— this Destination Truth companion takes readers on the supernatural expedition of a lifetime.

Josh Gates is an explorer, photographer, author, and television personality. His work and travels have taken him to more than seventy-five countries around the world. An avid scuba diver, he has participated in sub-sea archaeological excavations in the Mediterranean, and as a photographer, he's traveled from sweltering African villages to the icy heights of the Himalayas. In addition, he has scaled "the roof of Africa" on Mt. Kilimanjaro, and climbed on Aconcagua, the tallest mountain in the Americas. He is the host and executive producer of the Discovery Channel series Expedition Unknown and co-executive producer of Syfy Channel series Destination Truth. He is also the bestselling author of Destination Truth: Memoirs of a Monster Hunter.