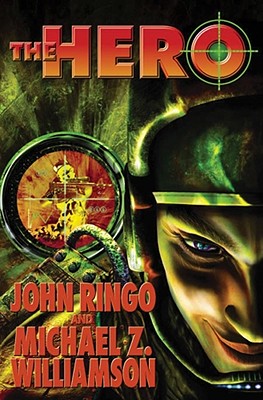 By John Ringo, Michael Z. Williamson
This Book Is Not Sold Online - Inquire In Store
Not In Stock/Special Order

The human was an expert sniper-and a psychopath. He had never failed in the past when he stalked human prey. But now he is on an enemy planet, and his prey is anything but human. The Darhel are a race with a highly developed empathic sense. Long ago, they learned that they cannot deal death to another intelligent being without being destroyed by the death agonies of their victim. Even though they have been manipulating other species behind the scenes for millennia, including the humans of planet Earth, they cannot bear to kill another being, and depend on other, less sensitive beings, to do their dirty work. But now one of the Darhel must kill or be killed. And the fate, not only of his own race, but all of humanity, is riding on his survival. The course of the next thousand years will be determined by whether or not he can learn to fight back. If he cannot, it will be too late . . . for the entire galaxy.

John Ringo had visited 23 countries and attended 14 schools by the time he graduated high school. This left him with a wonderful appreciation of the oneness of humanity and a permanent aversion to foreign food. A veteran of the 82nd Airborne, he brings first-hand knowledge of military operations to his fiction. His novels for Baen include the four novels in the New York Times best-selling Posleen Invasion series (A Hymn Before Battle, Gust Front, When the Devil Dances, and Hell's Faire), the two (so far) novels in his new far-future series (There Will be Dragons and Emerald Sea), and three collaborations with the New York Times bestselling author David Weber (March Upcountry, March to the Sea and March to the Stars).

Michael Z. Williamson is retired from the US military, having served twenty-five years in the U.S. Army and the U.S. Air Force. He was deployed for Operation Iraqi Freedom and Operation Desert Fox. Williamson is a state-ranked competitive shooter in combat rifle and combat pistol. He has consulted on military matters, weapons and disaster preparedness for Discovery Channel and Outdoor Channel productions and is Editor-at-Large for Survivalblog, with 300,000 weekly readers. In addition, Williamson tests and reviews firearms and gear for manufacturers. Williamson’s books set in his Freehold Universe include Freehold, Better to Beg Forgiveness, and Do Unto Others. He is also the author of The Hero–written in collaboration with New York Times best-selling author John Ringo. Williamson was born in England, raised in Liverpool and Toronto, Canada, and now resides in Indianapolis with his wife and two children.