Life As We Know It: A Collection of Personal Essays from Salon.com (Paperback) 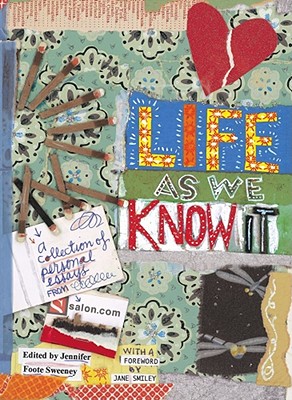 "...these essays are jewels of the unexpected, and in introducing them, I don't want to steal any of their surprise. Suffice it to say that family life...is alive and well, but it is not like anything you ever read about before in your life."
-- Jane Smiley, from the foreword
The nuclear family peaked in 1960 with 45 percent of the American population. Many decades later, the tidy ensemble is rare. Relationships, baby making, sex, dating, divorce -- they aren't what they used to be. But the mainstream media keeps the reality of American life a secret, only leaking the occasional tidbit to remind us that those in "unconventional" configurations are a sad anomaly to be pitied or ignored.
Life As We Know It offers proof in its most engaging form -- the personal essay -- that the big guys have got it wrong. This collection of blunt, lyrical, and often very funny work from award-winning Salon.com tells the true stories about how we live -- of hustling fertility drugs, losing a child, hating dad, and coming to terms with a parent who was the voice of "Frosty the Snowman" on TV. First-time writers and critically acclaimed authors like Amy Bloom, Kathryn Harrison, Susan Straight, and Benjamin Cheever, plumb the familiar to deliver portraits of moments, seasons, and eras that we recognize or long to understand.

Jennifer Foote Sweeney was a correspondent in the Los Angeles and London bureaus of Newsweek, a national writer for Newhouse News Service, and a reporter for metropolitan newspapers before becoming editor of Life at Salon.com. She lives in northern California with her husband and two daughters.