A Vast Conspiracy: The Real Story of the Sex Scandal That Nearly Brought Down a President (Paperback) 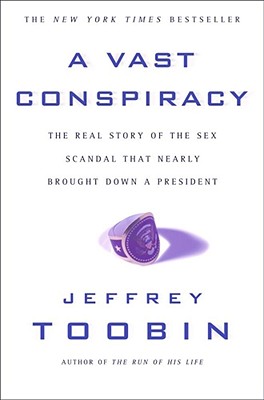 THE NATIONAL BESTSELLER
It was the most extraordinary public saga of our time, and Jeffrey Toobin gives us a definitive history of the ordeal that very nearly brought down a president. Here is the whole story of the Clinton sex scandals -- from its beginnings in a Little Rock hotel to its climax on the floor of the United States Senate with only the second vote on presidential removal in American history. Rich with Shakespearean characters and dramatic secrets, fueled with the high octane of a sensational legal thriller, and tinged by misguided, outlandish behavior that was played out at the very highest levels, Toobin's A Vast Conspiracy brings a dignity and integrity to this story that it has never before received.
The Clinton sex scandals will shape forever how we think about the signature issues of our day -- sex, privacy, civil rights, and, yes, cigars. A Vast Conspiracy will shape forever how we think about the Clinton scandals.

Anthony Lewis The New York Review of Books A superb work of factual and legal analysis....Few novels are as gripping.

People A story as taut and surprising as any thriller....Unimpeachable page-turner.

Michael Coffey Publishers Weekly Toobin has risen to the challenge of rendering the chaos of the impeachment, what led up to it and its denouement, in a sharp prose style and in a manner that makes sense of a disastrous phase of American political history.

Chicago Sun-Times A rich and readable reprise of the Clinton scandals by the New Yorker writer who shows brilliantly how the American legal system spun out of control.