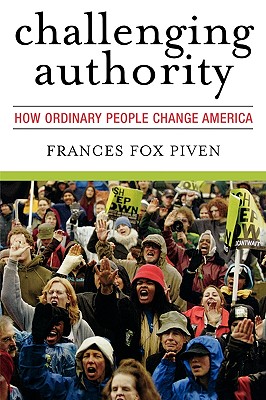 Challenging Authority argues that ordinary people exercise extraordinary political courage and power in American politics when, frustrated by politics as usual, they rise up in anger and hope and defy the authorities and the status quo rules that ordinarily govern their daily lives. By doing so, they disrupt the workings of important institutions and become a force in American politics. Drawing on critical episodes in American history, Frances Fox Piven shows that it is precisely at those seismic moments when people act outside of self-restricting political norms that they become empowered to their full democratic potential.

Frances Fox Piven is Distinguished Professor of Political Science and Sociology at the Graduate School at the City University of New York and past president of the American Sociological Association. She is the author of several books, including The War at Home: The Domestic Costs of Bush's Militarism (2004) and Why Americans Still Don't Vote: And Why Politicians Want It That Way (2000).