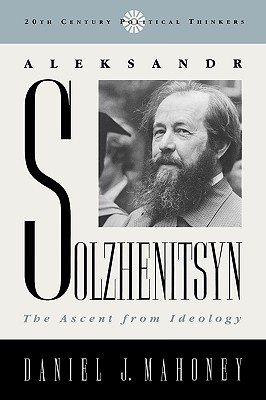 By Daniel J. Mahoney
This Book Is Not Sold Online - Inquire In Store

In Aleksandr Solzhenitsyn, Daniel Mahoney presents a philosophical perspective on the political condition of modern man through an exegesis and analysis of Solzhenitsyn's work. Mahoney demonstrates the tremendous, yet often unappreciated, impact of Solzhenitsyn's writing on twentieth century thinking through an examination of the writer's profoundly important critique of communist totalitarianism in a judicious and original mix of western and Russian, Christian and classical wisdom.

Daniel J. Mahoney is associate professor of political science at Assumption College in Worcester, Massachusetts. His previous books have dealt with Raymond Aron, Charles de Gaulle, Pierre Manent, and Aurel Kolnai. In 1999 he was awarded the prestigious Prix Aron.