The Facts on Jehovah's Witnesses (Paperback) 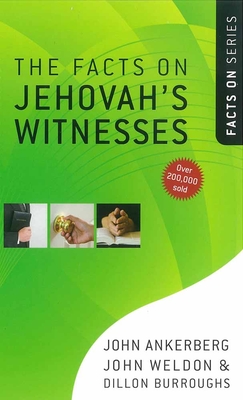 By John Ankerberg, John Weldon, Dillon Burroughs
$6.99
Unavailable, Out of Stock, or Out of Print

John Ankerberg, John Weldon, and Dillon Burroughs team up to revise and update The Facts on Jehovah's Witnesses, part of the popular Facts On Series (more than 1.9 million copies of books from this series sold). Known for their extensive research and Bible knowledge, these authors offer readers the essential facts they need to evaluate and discuss today's issues regarding the Jehovah's Witnesses, a religious organization, and the Watchtower Society. The concise, easy-to-follow information helps readers answer such questions as:

Whether the reader is merely curious or searching for specific information, The Facts on Jehovah's Witnesses will give them what they are looking for--easy-to-understand, factual, and relevant information about this group.

John Ankerberg, host of the award-winning John Ankerberg Show, has three earned degrees: an MA in church history and the philosophy of Christian thought, an MDiv from Trinity Evangelical Divinity School, and a DMin from Luther Rice Seminary. He has coauthored the 2-million-selling Facts On series of apologetic books, as well as Taking a Stand for the Bible and Israel Under Fire.Dillon Burroughs is an activist and the author or coauthor of nearly 30 books on issues of faith and culture, including the groundbreaking Undefending Christianity. Dillon has served among at-risk American youth, constructed housing in Mexico's barrios, provided aid relief in Haiti, and was most recently nominated for a CNN Hero award for his efforts to fight human trafficking. His written and edited works have been featured by NPR, MSNBC, ABC News, and other media outlets.John Weldon has authored or coauthored more than 80 books. He has a Ph.D. in comparative religion and a D.Min. with emphasis in contemporary religious movements, as well as master's degrees in divinity and Christian apologetics. With Dr. John Ankerberg, he has coauthored What Do Mormons Really Believe?, Fast Facts(R) on Islam, the "Facts On" Series of apologetic booklets, and others.