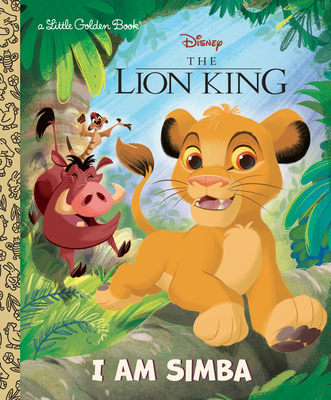 A new Little Golden Book all about Simba, the star of Disney's The Lion King--just in time for the live-action movie, which will be in theaters July 2019!

This new Little Golden Book celebrates everything that is special about Simba, the brave lion cub from the beloved Disney movie The Lion King. Nala, Timon, Pumbaa, and other animals from the Pride Lands are featured in gorgeous retro-style illustrations. This book is a must-have for children ages 2 to 5, as well as Disney The Lion King fans--and collectors--of all ages! And the new live-action version of the film, starring the voices of Beyonce, Donald Glover, James Earl Jones, and John Oliver, hits theaters July 2019.

Disney The Lion King was released in 1994 and became one the most popular animated films. This Little Golden Book is part of the charming "I Am . . ." series, which provides a unique introduction to favorite Disney characters.

New York Times bestselling author John Sazaklis enjoys adventures of his favorite characters. To him, it's a dream come true! By day, John is a somewhat mild-mannered art director and designer at a publishing house. He has also illustrated Spider-Man books and created toys used in MAD magazine. John lives with his equally (if not more) super-powered, beautiful wife and daughter in New York City.

Alan Batson is a British cartoonist and illustrator. His works include Everything I Need to Know I Learned from a Star Wars Little Golden Book, Everything That Glitters is Guy!, and Baby McStuffins.