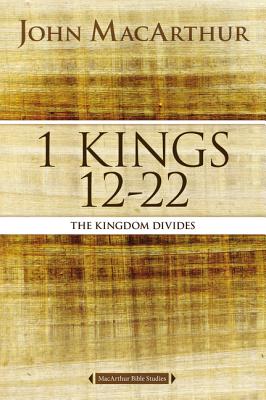 Under King Solomon the Israelites had been a united people, but that all changed when his foolish son Rehoboam came to power. In the days that followed, the nation divided into two separate kingdoms.

The reigns of these kings were turbulent, marked by a succession of ungodly monarchs in conflict with the Lord's prophets. Among these rulers, perhaps none stood out more than Ahab and Jezebel, who not only led the northern nation of Israel into idolatry but actually conspired to murder a man simply because they wanted his garden

In this study, pastor John MacArthur will guide you through an in-depth look at this historical period, beginning with the split between Judah and Israel, continuing into the remarkable events that occurred during the prophet Elijah's ministry, and concluding with the death of the ungodly King Ahab. Studies include close-up examinations of Elijah, Ahab, Jezebel, Asa, and others, as well as careful considerations of doctrinal themes such as "the Sin of Syncretism" and "Being Faithful to God's Word."

The MacArthur Bible Study series is designed to help you study the Word of God with guidance from widely respected pastor and author John MacArthur. Each guide provides intriguing examinations of the whole of Scripture by examining its parts and incorporates:

John MacArthur is the pastor-teacher of Grace Community Church in Sun Valley, California, president of the Master's College and Seminary, and featured teacher with the Grace to You media ministry. In more than four decades of ministry, John has written dozens of bestselling books, including The MacArthur Study Bible, The Gospel According to Jesus, and Slave. He lives in Los Angeles.