The Book of Horror: The Anatomy of Fear in Film (Hardcover) 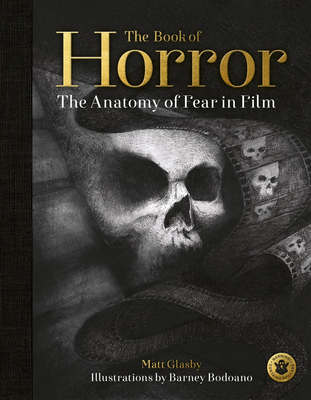 The Book of Horror introduces you to the scariest movies ever made and examines what makes them so frightening.

Horror movies have never been more critically or commercially successful, but there’s only one metric that matters: are they scary? Back in the silent era, viewers thrilled at Frankenstein and Dracula. Today, the monsters may have changed, but the instinct remains the same: to seek out the unspeakable, ride the adrenaline rush and play out our fears in the safety of the cinema.

The Book of Horror focuses on the most frightening films of the post-war era – from Psycho (1960) to It Chapter Two (2019) – examining exactly how they scare us across a series of key categories. Each chapter explores a seminal horror film in depth, charting its scariest moments with infographics and identifying the related works you need to see.

Including references to more than 100 classic and contemporary horror films from around the globe, and striking illustrations from Barney Bodoano, this is a rich and compelling guide to the scariest films ever made.

Matt Glasby is an international film journalist, author and member of the London Critics' Circle. His work appears in GQ, Total Film and SFX among other publications, and he the associate editor of Vera magazine. He has written two books: Britpop Cinema: From Trainspotting To This Is England (Intellect, 2019) and A–Z Great Film Directors (Cassell, 2015).

'The Book of Horror: The Anatomy of Fear in Film is a feast for the eyes as well as the mind and bound to delight any horror fan. Heartily recommended!'—Horrified

...this is the definitive guide to what properly messes us up.

'Film journalist Matt Glasby is the person you need to speak to if you want to know about abject terror. He lives and breathes horror and his latest book is testament to this.'

"An ideal gift for any fan of horror in your life."—Darren Paltrowitz, Jewish Journal

"This is an expertly curated examination of the scariest movies ever made, and how they work... a fascinating analysis of what scares us and why. It’s beautifully illustrated too, by Barney Bodoano. This gorgeous hardback is a must-have for any horror fan’s reference collection."—KendallReviews.com

"...deep diving and [the] clear, useful format gives The Book of Horror an air of surgical precision that, in my mind, puts it head and shoulders above most synopsis and review collections."—horrorbuzz.com

'Whether it’s by your television or on a shelf next to your Stephen King collection, The Book of Horror: The Anatomy of Fear in Film is sure to be an indispensable reference for anyone who loves to be scared.'—gobeyondtheveil.co.uk